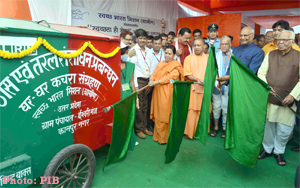 The President Shri Ram Nath Kovind today launched the nationwide jan aandolan, Swachhta Hi Seva, from Iswarigunj, a village in Kanpur district of Uttar Pradesh. With this the whole country swings in to mass Shramdaan for toilet making and cleaning of public places for next two weeks.

“Swachhta Hi Seva” Campaign is an unprecedented campaign to highlight, once again, the jan aandolan that is the Swachh Bharat Mission. This follows an impassioned call by the Prime Minister, Shri Narendra Modi, ahead of the 3rd anniversary of Swachh Bharat Mission that falls on 2nd October, 2017. The objective of the campaign is to mobilise people between 15th September and 2nd October, reigniting the “jan aandolan” for sanitation. Union Ministers, MLAs, MPs, iconic celebrities of India, sports stars, inter-faith leaders, corporates, etc. have been appealed to join in this campaign towards swachhta.

The President administered the nation-wide “Swachhta Hi Seva” pledge in Kanpur, which simultaneously initiated parallel action in all Gram Panchayats and cities of the country. He honoured village level champions from Uttar Pradesh who have contributed to making various villages, including Iswarigunj, open defecation free. The President also launched the Solid and Liquid Waste Management activities in the village which is the next major step in Swachhta after getting the villages Open Defecation Free.

Speaking on the occasion, the President said that every citizen who works for Swachhta is a rashtr-nirmata (nation builder). He called upon all citizens to join the Swachhta Hi Seva movement and become a rashtra-nirmata. He congratulated all award winning Swachhta champions present and said that they were the real heroes of this jan aandolan. He quoted a World Bank study that says that lack of Sanitation costs the country 6% of GDP annually, adding that the weakest sections of society are the ones most affected by this problem. He spoke about diseases transmitted by open defecation, concerns around dignity and safety of women, and economic loss to the family.

He called upon people from all sectors - elected representatives, corporates, NGOs, women, children, senior citizens, Panchayati Raj institutions, media and the youth - to come forward and contribute to the Swachh Bharat movement with vigour and enthusiasm.

In his address, the Chief Minister of Uttar Pradesh, Yogi Adityanath, welcomed the President back to his native village and said that Swachh Bharat, when it was first launched by the Prime Minister, had seemed like an impossible goal. He said, that Swachh Bharat is a critical component of the development of the country, and reaffirmed his government's commitment to achieve an Open Defecation Free (ODF) Uttar Pradesh by October 2018. He said that such an ambitious goal cannot be achieved without people's participation and partnership. For this, he mentioned that he is reaching out to grassroots leaders and elected representatives personally to involve all sections of society in this movement. He announced that Shamli, Bijnor, Hapur and Ghaziabad have already been declared ODF, and that 30 districts will be declared ODF in the State by December 2017.

Sushri Uma Bharti, Union Minister for Drinking Water and Sanitation, in her address, said that she felt great pride that the President's first public appearance after taking office was for the launch of the Swachhta Hi Seva campaign. She spoke about the crucial role of public participation in making Swachh Bharat a reality. She said that Swachhta was both, a right and responsibility, of each and every citizen of the country, and that this was fundamental to the realization of the Prime Minister, Shri Narendra Modi's vision of Swachh Bharat.

The occasion was also marked by experience sharing by 7 persons representing various sectors of society, who have been involved in supporting the Swachh Bharat Mission. These were Ms Anuradha Joshi Sarpanch, Kodariya, Indore; Ms Lavanya, school student, Karnataka; Mr Banzop Kharrymbal, Sarpanch, Mawlynong (cleanest village in Asia), Meghalaya; Mr Bindeshwar Pathak, Founder, Sulabh International; Ms Naina Lal Kidwai, Chairperson, India Sanitation Coalition; Mr Sanjay Gupta, Executive Editor, Dainik Jagran, Kanpur and Cadet Mansi Dwivedi, 17 UP Girls Battalion, NCC. They each represented different sections of society and took the Swachhta pledge symbolically on behalf of their respective sectors. They also made short addresses at the occasion, highlighting the work done by them in the past, and their Swachhta commitments for the upcoming fortnight and beyond.

In his welcome address at the inauguration, Secretary, Ministry of Drinking Water and Sanitation, Shri Parameswaran Iyer spoke about the clarion call made by the Prime Minister, Shri Narendra Modi, for every section of society and each and every citizen to contribute to the Swachhta Hi Seva campaign. He also gave a progress update of Swachh Bharat Mission Gramin and Urban, saying that Sanitation coverage in the country has gone up from 39% to 68% since the launch of the Mission.

This launch kicked off the nationwide campaign to mobilise people to do large scale shramdaan.