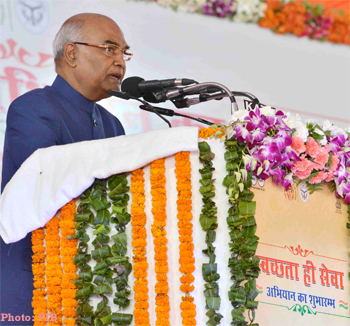 He also administered the 'Swachhta hi Seva' pledge to all present there whereby they resolved to create a clean, healthy and new India. The President honoured village-level champions who contributed to making Ishwariganj village ‘Open Defecation Free’.

Addressing the gathering, the President said India is fighting a decisive battle for cleanliness and hygiene. Today, all of them had taken an oath that committed them to ensuring public hygiene, personal hygiene and environmental hygiene. Cleanliness is not the responsibility of only sanitation personnel and government departments; it is a multi-stakeholder national movement. Together we should make the effort to clean our houses, public places, villages and cities.

The aim is all-round cleanliness and hygiene everywhere, with implications for health and sanitation and overall prosperity of our people. Achieving the goals of the Swachh Bharat Mission expeditiously will be an appropriate tribute to the Father of the Nation, Mahatma Gandhi.