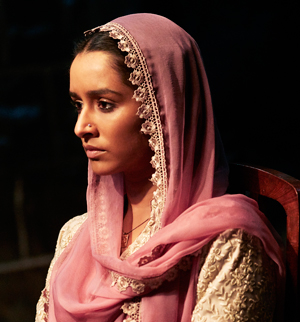 Apoorva Lakhia's next Haseena Parkar, biopic of a woman who came into recognition because of her brother Dawood Ibrahim, has created a lot of curiosity amongst the audience. Thought there has been a lot spoken about Dawood Ibrahim which is played by Siddhanth Kapoor in the film, there is very little people know about Shraddha Kapoor’s character Haseena Parkar.

Apoorva Lakhia spent almost 3 years with the story of Haseena Parkar where he spent time with Haseena herself, her family, police officials and everyone who ever knew Haseena Parkar. The real family of Haseena was very helpful in given Apoorva and his team access to old family pictures, things which were used by Haseena and a lot of content for research.

They once even visited the set of film when Apoorva was shooting one of the most intense scenes in the film. It had Ankur Bhatia’s character Ibrahim Parkar getting shot and Shraddha Kapoor groaning and weeping. That scene marks the turning point of Haseena Parkar’s life and something which the entire family suffered.

The scene was so vehement that the entire crew was in silence for a few minutes and the real family of Haseena Parkar were left with moist eyes.

Ankur Bhatia shares, " It was very taxing for both Shraddha and me as we had to go deep into our own dark places to act that scene. As we gave our shot and got out of the car, we saw Haseena's entire family weeping by the monitor. We must have done something right."