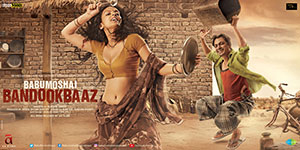 Mumbai:: Kushan Nandy's Babumoshai Bandookbaaz has been doing well at the box office. After raking in Rs 7.53 crores in the opening weekend, the film had passed the Monday test with flying colours earning Rs 1.38 crores on the fourth day.

Needless to say, the gripping drama has done great business and has earned Rs 1.21 crores on Tuesday, taking the 5 day total to Rs 10.12 crores.

Given that the crime drama has great word of mouth and has managed get good number of footfalls despite heavy rains (on Tuesday), it is expected to do better in the second week. The cast and crew are overwhelmed with the response that Babumoshai Bandookbaaz has got from the audience.

Made within a humble budget of Rs 5 crores, inclusive of P & A, the movie has raked in Rs 7. 53 crores at the box office over the weekend and the total of Rs 10.12 crores in five days.