The Deol brothers and Shreyas Talpade to turn 8th September into Nasbandi Day with Poster Boys! 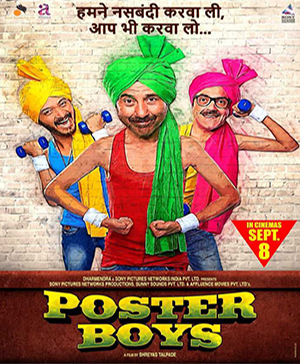 The trailer of Poster Boys which stars Sunny Deol, Bobby Deol and Shreyas Talpade garnered an overwhelming response when it released and Sunny Deol's face on the posters of a Vasectomy campaign became the talk of the town.

Talpade's directorial debut does not aim to preach about population control and is in fact a light-hearted comedy-drama that is driven by content. That is also the reason why Sony Pictures Networks Productions decided to back the film.

To this actor-director Shreyas Talpade said, “Poster Boys is based on a real-life incident and I just hope that this never happens to anyone. The humiliation and crisis that the three characters have to deal with makes them go through a roller coaster ride.”

“The film is nowhere trying to be preachy and its purely a light-hearted drama and high on content. It would be a proud moment for me if 8th September becomes Vasectomy Day and the audience enjoy the film as much as we did making it,” he added.