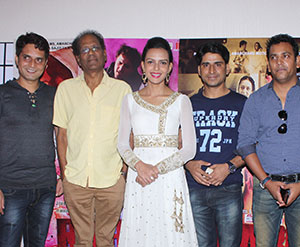 After the hard-hitting Mantostaan, young director Rahat Kazmi's Rabbi raises debates whether music is forbidden in Islam or not.

The film is a bold take on a complex issue, trailer launch saw the first look of the film with an essence of soothing folk music and a touch of satire. Besides the cast & crew of the film, including director Rahat Kazmi, actors Bidita Bag and Virendra Saxena, producers Zeba Sajid and Sanjay Amar, presenters Mujeeb Ul Hassan and Jitesh Kumar, music director Aamir Ali, Imran Shahid who has scored the background music and cinematographer Shree Shankar, Umang Jain, Sameer Patel and Ravinder Reddy were also present at the do.

"People are liking the trailer and some of the top critics have already watched and praised the film in their reviews in India, Canada and other countries. Such films are preferred by audiences who are fed up of the run-of-the-mill films," aver presenters and young energetic entrepreneurs Jitesh Kumar and Mujeeb Ul Hassan, focused on promoting sensible and content-oriented cinema.