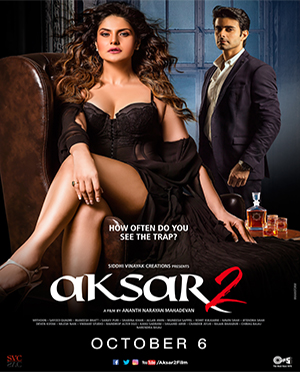 From the makers of the musical thriller Aksar (2006) comes yet another riveting, suspense thriller Aksar 2 featuring Gautam Rode, Zareen Khan and Abhinav Shukla.

Helmed by actor-director Ananth Mahadevan, Aksar 2 is scheduled to release on 6th October, 2017.

Sometimes evil raises its head in the most ordinary minds. Khambatta the ageing owner of an empire is unaware of a diabolical plot being hatched in her own penthouse. Her investment banker seeks to exploit an opportunity but discovers a shocking truth under the labyrinth.

The governess, her boyfriend, the butler and the banker find Khambatta and the situation spirals out of control. Nothing and nobody are what they seem. Aksar 2 takes deceit, passion and conspiracy to a suspenseful new high.

Ananth Mahadevan says, "Suspense and mystery need to be deviously woven into the plot. The unpredictability of the characters and situations keeps the audience guessing. Our attempt is to keep them on the edge of their seat throughout AKSAR 2."

Presented by Siddhivinayak Creations, produced by Narendra Bajaj & Chirag Bajaj and directed by Ananth Mahadevan, the music of Aksar 2 is composed by Mithoon.