Babumoshai Bandookbaaz makes a positive impression on the critics and fans alike! 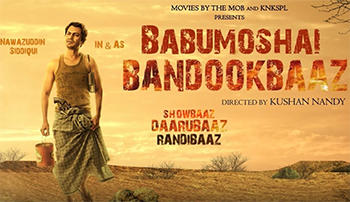 Interestingly, the makers of the gripping drama fought against all odds - be it the pre-release Censor Board battle and post release - irrespective of the strike in Punjab, Haryana and Chandigarh and heavy rains and festivities in Maharashtra, Babumoshai Bandookbaaz is well on its way to making a considerable profit at the box office.

Things are looking bright for the Indian mobster film as it has earned Rs 2.05 crores on day one (excluding Punjab, Haryana and Chandigarh). Early reports also suggest that the crime drama will continue to go strong over the holiday weekend.

With interesting narrative and twists and turns, real backdrop, fascinating background score, stupendous performances and hard-hitting dialogues, Babumoshai Bandookbaaz makes for the first choice for the cinegoers among the other releases this week.

Nawazuddin’s ardent fan base has certainly translated to the box office prospects of the crime drama, with the critics raving about yet another powerhouse performance from the versatile actor.

If that wasn't all, early reports also suggest that Babumoshai Bandookbaaz will continue to go strong over the holiday weekend considering the positive word of mouth.

Distributor Anil Thadani says, “Irrespective of the high competition with various films releasing on the same day, Babumoshai Bandookbaaz has clearly stood out of the clutter with its average occupancy higher than other films that released on the same day. The word of mouth is good and we are positive it will only grow here onwards.”

Here are some of the reviews:

Kushan Nandy gives you a film that you find yourself compulsively watching. Ghalib Asad Bhopali has got the goon-dictionary pat and his lines add grit to proceedings. Nawazuddin’s self-deprecating remarks and his seamless transformation from killer to lover is applause-worthy. Bidita is an interesting find for Bollywood. Not only does she smooch and seduce with a raw intensity, she wins brownie points for a couple of emotional scenes as well.

Nawaz-the diminutive, casually soft-spoken Everyman in shirt and lungi—is the opposite of obvious swag. You're naturally drawn to him nonetheless because you simply can’t take your eyes off his understated presence. He literally stoops to conquer. The beauty of this film is also the sort of fresh talents you see around the li'l guy—the cop character is a complete champ, as is Babu's competitor, or his wife, or the politician…. Together they represent a rather rooted, moody film with a fairly recognizable family tree, some of which show up in obvious nods/tributes to pics like Ram Gopal Varma’s Satya (Babu and his wife at the door, when he returns home), or Gangs Of Wasseypur (the camera gazing at a naked man washing clothes by the tube-well, instead of a woman).

The postman of death is powerful and interesting to watch on the big screen.