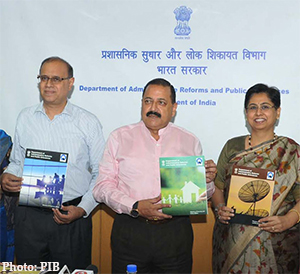 All ministries/departments to switch over to e-office by this year, says Minister

Addressing on the occasion, Dr Jitendra Singh said that under the leadership and encouragement of Prime Minister Shri Narendra Modi, various good governance initiatives have been undertaken. He said that under PM’s awards, young officers are now vying for excellence in implementation of priority programmes. He said that the number of grievances lodged has increased 5 fold in the last three years, from 2 lakh grievances in 2014 to 11 lakh grievances now. He said that this increase is due to the quick response given by the Government to the grievances. He further said that now the average time taken to dispose the grievance has been reduced to one week.

He also said that for the PM awards to be presented on Civil Services Day 2018, the following four priority programmes have been identified:

He also said that efforts are being made to enlist all districts this year. He said that the focus will be on the quality of implementation of programme.

Elaborating on the initiatives of the Department of Pensions, Shri C. Viswanath said that GPF rules have been liberalized. He also said that a committee has been constituted to make recommendation on the National Pension System which is applicable to the young officers who joined after the year 2004. He further said the officers will be rewarded under the ‘Anubhav’ initiative. He also talked about setting up of Pensioners Adalat to quickly resolve the issues of pensioners.

Reforms have been suggested for the next 20 Ministries/Departments e.g. in Department of Rural Development, for poor quality of roads constructed, payment to contractors is based on checklist of quality parameters under Pradhan Mantri Gram Sadak Yojana. In Ministry of Women and Child Development, as rape complaints are sometimes overlooked by police, it has been suggested to sensitise male cops on gender equality through training sessions. In Ministry of Drinking Water and Sanitation, to address poor quality of drinking water in rural areas, it has been suggested that all Gram Panchayats are given field testing kits for water quality testing. In Ministry of Electronics and Information Technology, for Digital Locker login issue in case of mobile loss, it is suggested that there may be a Provision of 'recovery password' through alternate email (E.g.: GMAIL).

Steps have been taken to identify focus issues and arrive at the root cause of grievance so as to enable systemic reforms to be put in place to alleviate the root cause. A Project Management Unit has been set up for monitoring these reforms in consultation with concerned Ministries/Departments. A dedicated team has been engaged who conduct intensive deliberations with the concerned Ministries/Departments for identifying the reforms that have been implemented and draw up the monitoring metrics indicating impact of these reforms.