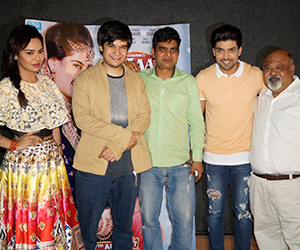 Gurmeet Choudhary and Vivaan Shah are all set to start this wedding season in a twisting manner by their upcoming movie "Laali Ki Shaadi Mein Laaddoo Deewana". As they promoted their film out here in Delhi along with the cast Kavitta Verma, director Manish Harishankar and producer TP Aggarwal.

The leading lady of the movie Akshara Haasan, will portray the character of Laali, whereas Vivaan will be seen as Laddo. On the other hand Gurmeet is gonna be a hotshot Royal Rajkumar Veer in the same. Other cast also includes, Kavitta Verma, Saurabh Shukla, Ravi Kishan, Kishori Shahade, Jyoti Kalash.

As per Gurmeet, ”The story of the movie is really impactful, and my chemistry with the cast specially Akshara was fabulous, I enjoyed my bromance with Vivaan”. Whereas, Vivaan felt the same and seemed excited for the movie,”We had an overall blast experience, this film is really very cheerful, bright, even as per summers too. It is going to be a stress buster for sure”. Even Saurabh Shukla seemed confident for the movie, “The story of the movie is different from the other love stories, people will get a good lesson from it”. Kavitta Verma itself felt blessed to be the part of this movie.

Directed by Manish Harishankar, “Laali Ki Shaadi Mein Laaddoo Deewana”, is a complete family entertainment movie, with full of comedy, romance and drama. As Laali and Laddo get trapped in a royal wedding which takes place in Vadodara, by their own mess. This movie comes along with major twists which also highlight the dose of reality in the society.

On the other hand, regarding the controversy of pregnant women, producer TP Aggarwal stated, “We are supporting creativity, and we are standing by it entirely.

Featured by Star Entertainment Worldwide, under the production of TP Aggarwal and Rahul Aggarwal, this comic drama based movie is slated to release on 7th April.