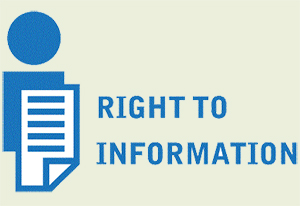 No change in fee structure or word limit in RTI queries

Government committed to full and easy implementation of RTI

A factually incorrect and misleading news report appeared in a section of the media that a new set of RTI Rules have been formulated which creates difficulties and hurdles in the right of the citizens to get information from the Government. It has been alleged that the size of the RTI has been restricted to 500 words and a provision of fees has been unfairly introduced in the Rules.

The facts are totally to the contrary. On 31st July, 2012, the Central Government notified the RTI Rules under Section 27 of the Right to Information Act, 2005. A copy of existing rules is available on the official website of DOPT. The Rules provided that an RTI application will ordinarily be not more than 500 words (subject to exception) with a nominal fee being charged from each applicant. These Rules were framed and notified in 2012.

However, legality of the CIC (Management) regulations of 2007 was challenged before the Delhi High Court and these were quashed. The matter has been pending before the Supreme Court. The Government therefore decided, in consultation with the CIC, that a comprehensive set of rules be notified by consolidating the key provisions of CIC (Management) Regulations and also the Rules of 2012. Same has been put up in public domain for comments.

The key provisions of the RTI Rules, 2012 have been identically incorporated verbatim. No change has been made in the RTI fee structure. The Government is committed to ensuring a full and easy implementation of the Right to Information.

The factual position on the proposed Rules is as follows:

2. The provision with respect to charging rates is identical to that contained in existing RTI Rules 2012 which provides for charging rates as per price fixed for a publication or Rs.2 per page of photocopy for extracts from the publication. There is a further provision in rule 5 that no fee under rule 3 and rule 4 shall be charged from any person who is below poverty line. This provision has been retained as such in the new proposed rules. Therefore, there is no change in fee and the existing rules have been proposed to be continued.

3. There is no change in the postal charges for sending the information.

4. The proposed rules do not limit the filing of either complaint or appeal “online” only. Both rule 8 and rule 13 dealing with filing of appeals and complaints especially provide for filing offline as well as online.

6. With regards to the provision of officials being allowed to file documents to counter claims of false information, it is clarified that at present, as per the procedure of CIC, once appeal is taken cognizance of, the CPIOs are given a notice to furnish their submission before the appeal is decided. This was also part of the Central Information Commission (Management) Regulations 2007 which are now being incorporated in the rules. Therefore, the existing standard operating procedure has been proposed to be incorporated in the rules.

As can be seen from above, the allegation that there is a move to dilute the provisions of RTI is unfounded. The proposed amendments to the rules are in public domain for comments by April 15, 2017 and will be finalised keeping in view the public feedback received in the matter. The comments can be sent both online and in hard copy to the Department.