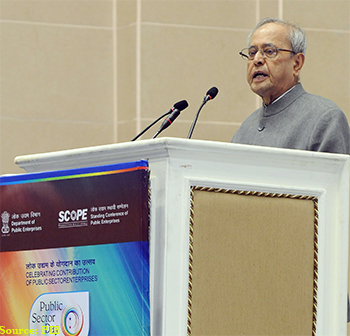 Speaking on the occasion, the President said that celebrating this Day is an acknowledgement of the invaluable contribution made by our Central Public Sector Enterprises (CPSEs) since independence when PSEs had been chosen as the vehicle of industrialization in our country.

He said that he was a firm believer in the continued relevance and importance of the Public Sector in our economy. He was confident that CPSEs will continue to do well in the future and meet new challenges.

The President said that in our country we started with only five PSEs with an investment of 29 crore. However, their growth over the years is very substantial. Their overall net profit increased by 12.5 percent during 2015-16. This is appreciable since they have continued to perform well despite the fact that the global fiscal and economic scenario and industrial climate is not very encouraging. He said that India is a fast growing economy and many more glorious chapters will be added to the credit of PSEs in the future too.

The President said that he had been associated with SCOPE functions on many occasions. He congratulated the awardees and wished them further success.