Minister of State Promotion of Women Football in the Country 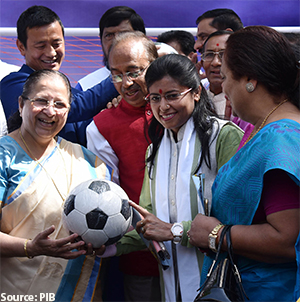 The Minister of State (I/C) for Youth Affairs and Sports Vijay Goel said in the Rajya Sabha today that the Indian women's national team is currently ranked 54 by FIFA whereas men's team is ranked 132.

In a written reply he said development and promotion of a sport is primarily the responsibility of the concerned National Sports Federation (NSF). Government has recognized All India Football Federation (AIFF) as the NSF for promotion and development of football sport in the country.

AIFF has informed that the following steps have been taken by them to promote women football in the country:

(i) The Indian Women's League (IWL) has been started in 2016-17. 25 teams from various States of the country participated in the League. The IWL is planned to be an annual affair with regular improvements every year.

(ii) Regular grassroots activities involving Girls' schools, Physical Education female teachers are organized as part of the ‘FIFA Live Your Goals Program' as well as separately. In coach education, seats for women candidates are reserved in all coach education courses conducted by the AIFF.

Indian Women League (IWL) is an event in which city teams, owned by private franchisees participate. Government has no role in the matter.

All India Football Federation has informed that to increase the viewership they have taken the following steps:

(i) Live facebook stream has been done for all the matches of the Indian Women's League 2016-17. The minimum viewership of the live streaming was approximately 32,000 per match while the maximum was 64,000.

(ii) The IWL was launched in presence of all journalists from all major media houses in Delhi, which resulted in significant media coverage of the event. On an ongoing basis as well, regular print media and social media coverage was provided to reach out to the mass audience.