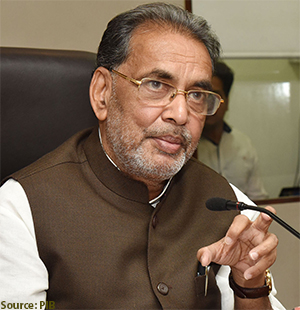 The Union Agriculture & Farmers Welfare Minister, Radha Mohan Singh said that Hon’ble Prime Minister Narender Modi has dreamt of a New India, which will be free of black money and corruption. Promotion of Digidhan and cashless transactions are part of the mission. Singh stated it while inaugurating Digidhan Fair in Motihari, Bihar. The fair continued throughout the day where banks, Common Service Centres (CSC), private digital payment service providers etc. informed the consumers as well as traders about the new technology.

Singh said that there are more than 100 crore phones and out of them 30-40 crore is smartphones. There are about 50 crore internet users. And if these are utilised properly, credit cards won’t be required. Banks have devised UPI cards under which if the mobile app is downloaded, people can do the transaction through any bank on the basis of their phone numbers.

Singh further stated that 2.15 crore railway tickets are booed out of which 1.30 crore tickets are booked online. He informed that there is 144 crore bank accounts by and large, out of them 117 are the savings account. A total number of Jhandhan account is 28.02 crore. So far 40 crore bank accounts are linked to Aadhaar Cards. Agriculture Minister informed that the total number of Aadhaar cards is 113 crore and there is 20.13 crore POS machines in the country and by the end of this month 10 lakh new machines will be added. Apart from this, there is 5.7 crore e-wallet users and 110.6 crore credit/debit cards. So far 21.9 crore consumers have got Rupay cards and its usage has increased up to 40% in the recent time. He further opined that Minister of Agriculture is promoting the cashless system in every sort of transaction linked with the agriculture sector.

Singh said that to promote cashless transaction, the Ministry of Agriculture is providing all kind of facility. The Minister said that the government of India has waged a war against black money by initiating demonization. In 500 cities awareness programs are being run. Every year Rs. 10 lakh crore transactions take place in the country, only 32% transaction is made online.

Agriculture Minister informed that in the last two years the government has taken following steps to combat black money:

a) Special Investigation Team (SIT) was constituted.
b) A law was made to tackle undeclared foreign assets and deposits.
c) India revised the Double Taxation Avoidance Agreement (DTAA) with Mauritius and Cyprus
d) A treaty was signed with Switzerland to obtain information about the bank accounts of Indians in HSBC bank.
e) Cashless and digital payments have to be promoted
f) Benami Transaction act will be modified.
g) Income declaration scheme 2016