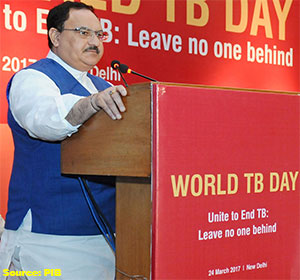 “Ensuring affordable and quality healthcare to the population is a priority for the government and we are committed to achieving zero TB deaths and therefore we need to re-strategize, think afresh and have to be aggressive in our approach to end TB by 2025.” This was stated by J P Nadda, Union Minister of Health and Family Welfare at a function on the occasion of ‘World TB Day', here today. The Health Minister announced that the National Strategic Program (NSP) will be finalized in one month and will be rolled out across the country. He further added that the resources will not be a constraint and the Government will continue to work with all stakeholders, in devising short term and long term approaches. Nadda also emphasized on the need for compassion in treatment of TB patients.

Acknowledging substantial progress made by the Government in combating TB, Nadda said that TB control and India's National TB Control Programme has been recognized as one of the most successful Public Health Programmes. He further added that TB is a disease which is largely curable and preventable. Still we are facing this task of high incidence and on top of it Drug Resistant TB. “Drug resistant TB is a growing threat and the diagnosis and treatment is much costlier. We have gone deep into the reason of such a situation and have decided to take a head on attack on the root cause of the disease,” Nadda said.

Speaking at the function, Nadda informed that the Government has made case notification mandatory. “A high proportion, almost 92% of TB patients with HIV has been put on antiretroviral therapy, Nadda added. The Health Minister further stated that the government has rolled out more than 500 CBNAAT machines in one year, offering rapid quality diagnostics, linking at least one such machine for each district and these steps have led to 35% rise in the Drug Resistant TB case notification in 2016. “New anti-TB drug Bedaquiline has been introduced under Conditional Access Programme (CAP) to improve outcomes of drug resistant TB treatment,” Nadda elaborated.

Addressing the participants, Nadda further said that IT based E-Nikshay platform have been made user friendly so that Private Doctors find it easy to notify. The Health Minister reiterated that keeping TB at bay is everyone's responsibility, including the private sector to provide quality TB care to all TB patients. “Every TB patient should be able to access treatment without fear of stigma or unwarranted retrenchment,” Nadda said.

At the event, both MoS (Health) highlighted the several notable steps taken by the Ministry in case finding, formulating standards of care, implementation of RNTCP, govt. notifications, surveillance tools, advancement of eHealth and eGovernance needs, counseling for TB patients, etc.

The RNTCP is pro-actively engaging with the private sector to improve notification and the quality of care it delivers, by using IT enabled tools and innovative public private partnership models. In the last one year, these efforts have resulted in 1.5 fold increase in number of case notifications from private health care providers.

MoHFW will soon be announcing the new National Strategic Plan for TB Elimination (2017-2025) which will provide a framework to guide all stakeholders, including state governments, development partners, civil society organizations, international agencies, research institutions, the private sector, and many others, to realise the Prime Minister's vision of achieving TB elimination by 2025, five years before the Sustainable Development Goals (SDG) target.

Also present at the event were Dr. Arun K. Panda, AS & MD (NHM), A. K. Jha, Economic Advisor, Ministry of Health & Family Welfare, Dr. Sunil Khaparde, DDG(TB), Directorate General Of Health Services, and other senior officers of the Health Ministry, representatives of WHO, World Bank and other development partners.