President of India on the occasion of inauguration of 'International Conference on Bihar Jharkhand: shared history to shared vision' 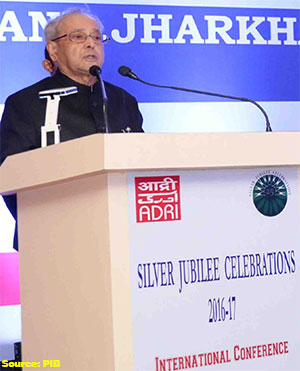 Extract of speech of President of India on the occasion of inauguration of 'International Conference on Bihar Jharkhand: shared history to shared vision'

1. The enormous gap between the potential and reality of development in Bihar and Jharkhand, the former having plenty of fertile land and the latter endowed with abundant mineral resources, has attracted the attention of many scholars. Together, they have delved into nearly all dimensions of the economy and society in Bihar and Jharkhand - the colonial legacy, development trend in the post-independence era, social dynamics, the long and wide phenomenon of migration, the caste-based political mobilization, the issue of ecology and environment, the question of sub-national identity or the demand of social justice, all of which have contributed to make Bihar and Jharkhand what they are now. At this moment, both Bihar and Jharkhand, as we all know, are at a crossroad and one wonders which path they would tread in near future to meet the aspirations of their own people. And these aspirations are now much higher than before, thanks to the recent political mobilization in the region which has brought a new section of the people into power who were all politically marginalized till recently.

2. At this juncture, however, we only need to remember one important lesson of history, viz, the burden of history, howsoever heavy, can indeed be unloaded with right social mobilization and political initiatives. We also need to realize that, for seriously disadvantaged regions like Bihar and Jharkhand, a strategy of development requires the policy makers to unleash the productive forces of the economy, and not just unquestionably follow a path of industrialization, as was done by countries or regions which had developed earlier. It is here that one requires directed research which can identify appropriate policies that best suit the interests of the regions. As an example from the recent past, one may note that Bangladesh, once a part of Bengal Presidency, was indeed able to meet its development challenge effectively, charting an innovative path of development. This experience of Bangladesh has great lessons for some eastern Indian states like Bihar, Jharkhand and West Bengal.

3. More specifically, one may consider the immense potential of human development for promoting economic development in regions like Bihar and Jharkhand. The international experience shows that, for specially disadvantaged regions, human development, could indeed be an alternative development strategy. Under this strategy, it is possible for disadvantaged regions to change their comparative advantage from low skill labor-intensive goods and services to more skill-intensive goods and services provider through deliberate human development. A logical requirement of this alternative development strategy will be prioritizing investment on education beyond what would happen under 'normal' circumstances. One may also note here that education does not mean economic advantage for the educated persons alone. It has some other important advantages as well - it empowers people and also promotes their participation in both development programs and the political process.

4. In the context of development research, I may also mention here that not all our current development problems lend themselves easily to techno-managerial solutions. In most of the developing nations, which attained their independence in the middle of the previous century, the institution of state in considered to be very pervading, with very limited space for non-state institutions. The international development experience shows, in the absence of such non–state institutions, often called 'civil society organizations', the efficiency of the state–led development process is bound to be limited. Such institutional gap is probably found in most parts of India, but this gap is particularly wide in disadvantaged states like Bihar and Jharkhand. In this background, it is indeed an important agenda for the social science research, not just investigate how this institutional gap has emerged over the years, but simultaneously suggest social interventions that would remove this gap.

5. In the recent past, both the states have started doing well. Particularly Bihar has shown the way in implementation of many social development schemes. The growth performance of Bihar economy has been steady over the past one decade registering an annual growth rate at 10.5 percent. This is a remarkable achievement. While Bihar still remains a largely agricultural state, Jharkhand is slowly transforming itself into an economy with larger share of service sector. Governments in both the states have taken a large number of steps to speed up the transformation of the social and economic conditions of the states. I wish the people of this region all the best in their march forward.

6. I am very happy to learn that the Asian Development Research institute (ADRI) is one of those institutions which have been active in social science research during the last 25 years. One of the reasons why the institute has been thriving is the orientation of its research agenda which is - 'direct relevance to development efforts made by any group of institutions'. It has also been a goal of ADRI to disseminate its research results in a more innovative, demystified and use worthy from, reducing the gap between undertakers of research and users of research output. Today, I am told, ADRI is providing research support to not just state or central government, but a number of international agencies as well, like the World Bank, UNICEF, DFID and some others. Let me take this opportunity to congratulate the members of ADRI for their academic achievements. I also hope that they would continue their efforts in coming years and attain new heights in their academic pursuit and simultaneously provide valuable research support to various development agencies.

7. This International Conference, as I learn, is dedicated to the memory of Late Arvind Narayan Das, who was the Chairperson of ADRI for five years, before his premature demise in 2000. Dr. Das was one of those rare social scientists whose writings had crossed disciplinary boundaries. His research work had spanned the fields of economic, sociology, political science, social history and all issues that concern development. To enlighten people, he had joined journalism and indeed left a brilliant mark in that field too. Two of his excellent books 'Republic of Bihar' and 'Change : The Biography of a Village' also underline how deeply rooted he was to Bihar. I join the members of ADRI in paying tributes to Dr. Arvind Narayan Das, a great scholar and a great soul.

8. In the end, I wish that Asian Development Research Institute achieves all the glory and success in its journey and become an essential resource for developmental policy research for the region. I wish all of you, a very successful and fruitful year ahead.