The laughter riot continues with Blame It On Yashraj's 100th Show 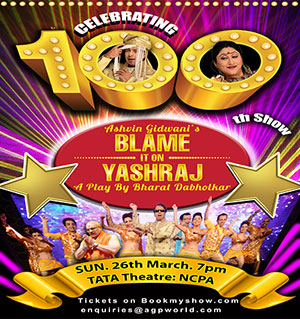 Mumbai: Riding high on its success, the cast & crew of 'Blame It On Yashraj' are all set to perform their 100th show, on Sunday, 26th of March at Tata Theatre: NCPA. Having performed in multiple countries and receiving great responses from the media and the audience, the show has come back to Mumbai to celebrate this special occasion.

Bharat Dabholkar is the creative genius behind this play. Blame It On Yashraj is based on the story of a Punjabi/Bengali family, who get caught up in a wedding hassle when their darling daughter decides to marry a Muslim boy.

It deals with our social prejudices and has its own unique take on mixed marriages in the country, which makes it a laughter riot for the viewers.

The play is well synchronized with rapidly changing video walls as backdrops and engrosses you to its musical and dance performances. Also, a special mention to the hilarious parodies of popular Bollywood tracks.

The cast for the same comprises of well-known stage and TV artists. The play, which will feature a foot-tapping score by Louis Bank, promises to be a laugh-a-minute roller coaster ride.