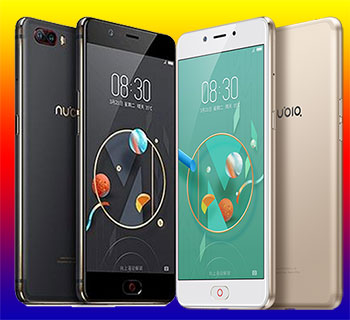 Chinese Multinational ZTE has brought three new models in the native market. The handsets belong to the sub-brand (subsidiary) Nubia and are named M2, M2 Lite and N2. All three sport superb selfie cameras and have some other common specifications. About to hit the store shelves soon, M2 is priced at CNY 2,699 and CNY 2,999 for the 64 GB and 128 GB variants. The M2 Lite starts with pricing of CNY 1,799 and will probably be out with M2. The other model N2, which is the successor of last year released Nubia N1, carries a price tag of CNY 1,999 and will be available in markets from April 8 onwards.

Shared Specs: While M2 is a high-end phone with exceptional features, it has the same 5.5-inch sized display that the others have, but the resolutions in all cases differ. Although the mid-range phones M2 Lite and N2 have 13-megapixel main snappers, they do not have dual-rear camera setup like Nubia M and they all are embedded with amazing 16 MP shooters in the front for the selfie enthusiasts. The three handsets run Nubia UI 4.0, though the android operating software versions are distinct. The dual-SIM supporting phones are with hybrid dual-SIM configuration. The metal alloy built devices are offered in Black and Gold shades by the company as of now. Fingerprint sensor has been integrated in these newly launched phones in the home button for M2 as well as, M2 Lite and on the back panel of N2.

Nubia M2: Powered by 64-bit Qualcomm Snapdragon 625 MSM8953 SoC, the device has 4 GB RAM and 64 GB/128GB inbuilt memory which can be expanded up to 200 GB. The octa-core processor clocked at 2.0 GHz is combined with Adreno 506 GPU to give a good performance. The system of the phone is based on Android 6.0.1 Marshmallow OS and the user gets to interact through a full HD 2.5D, AMOLED display with a resolution of 1920x1080 pixel protected by Corning Gorilla Glass. It is supported by non-removable 3,630 mAh battery backup that comes along with in-house Neo Power fast charging support.

The most attractive feature of the phone is the dual rear camera of 13-MP each, one being RGB and the other being monochrome sensor shielded by Sapphire glass lens. While the main camera has NeoVision 6.0 technology and f/2.2 aperture, the secondary camera has 80-degree wide camera lens and f/2.0 aperture. Other specifications in terms of connectivity of the Nubia M2 are 4G LTE, GPS with GLONASS, Bluetooth 4.1 LE and Wi-Fi. The sound quality is good since it has Hi-Fi audio output with 7.1 Dolby sound support, by virtue of TAS2555 audio chip.

Nubia M2 Lite: Inspite of some similarities with M2, there are quite many notable lower specifications in this variant for the obvious reason that it is a cheaper than the other one. The size of the display being the same, the panel comes with only HD, IPS technology and resolution of 1280x720 pixels. It comes with octa-core MediaTek Helio P10 SoC and is coupled with Mali-T860 GPU. The system is aided with storage of 3GB/4GB RAM and 32GB/64GB ROM that is expandable up to 128 GB via microSD card. The handset also comes packed with 5V/2A fast charging supported Li-ion 3000 mAh battery. In imaging front, the single main sensor with dual-tone LED Flash, f/2.2 aperture and 5P lens, while the selfie shooter is same as that of M2. The 164 grams handset measures 155.73x76.7x7.5mm and uses customised laid-on-top UI with Android 7.0 Nougat. The AW8738 audio chip offers Hi-Fi sound output and the 7.1 channel DTS sound effects are also enabled in the phone.

Nubia N2: It flaunts a 1920x1080 pixels, AMOLED, Full HD display panel unlike its predecessor N1. Designed slight differently with curved antennas bands, it also features a physical home button like the M2 and M2 Lite. In optics department, apart from a nice front camera, the primary camera is assisted by PDAF and Dual-LED flash. The 7.9 mm thick device carries a weight of 180 grams and is supported by Android 6.0 Marshmallow, which allows split screen multitasking. The USP of the handset is the mammoth 5000 mAh battery like its previous version which includes 18W fast charging technology and can deliver a talktime of about 60 hours reportedly. As regards the processor, it is packed with MediaTek MT6750 octa-core chipset under the hood and 4 GB RAM with expandable 64 GB of in-built storage. Talking about connectivity options it is laden with 4GLTE, Wi-Fi, Bluetooth v4.1, GPS, USB Type-C port and 3.5mm audio jack. A transparent silicone case and a screen guard come along with the handset for free.

There was no information regarding the availability of the Nubia M2, M2 Lite and N2 for sale in the foreign markets.