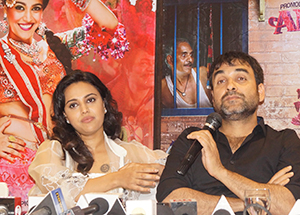 Swara Bhaskar is all set to give a bang with her upcoming release "Anaarkali of Aarah". As she promoted her film out here in Delhi along with the cast Pankaj Tripathi, (director) Avinash Das and (producer) Sandip Kapur.

Whereas, her life turns with a twist, which came up with some serious conflicts for the same. And her fight for the stereotypicals in the society is the core of the movie.

Swara said that "The script of this movie is so good that i feel so proud to be a part of this film. Working in this film is itself a award for me. I did alot of research before doing this movie.

Featured by Promodome Motion Pictures, produced by Sandip Kapur and Priya, "Anaarkali of Aarah" is slated to release on 24th March 2017.

Swara Bhaskar and Sandiip Kapur launch the trailer of Anaarkali of Aarah!