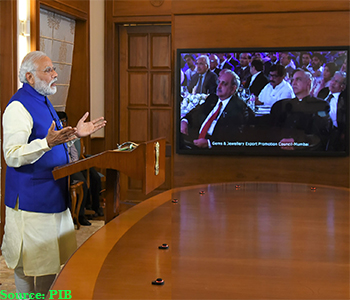 Distinguished Guests from India and abroad
Delegates
Ladies and Gentlemen

I am very happy to address you at this charity dinner at the International Diamond Conference. This conference is part of the Golden Jubilee celebrations of the Gems and Jewellery Export Promotion Council of India. The conference on the theme of “Mines to Market 2017”, brings together miners, diamond companies, experts, retailers, bankers and analysts from across the globe.

Friends, till recently Indian importers had to go abroad to view and purchase rough diamonds. This reduced the efficiency of the supply chain. Many of you wanted us to enable viewing and trading to happen in India. In December, 2014 at the World Diamond Conference held in Delhi, I had announced in the presence of the Russian President that we would set up a Special Notified Zone to achieve this. This promise has been kept.

Amendments have been made to our laws to enable rough diamonds to enter and exit, duty free for the purpose of viewing. The Special Notified Zone at the Bharat Diamond Bourse became operational in November, 2015. This has already shown good results. Earlier only eighty to ninety big merchants used to get access to global rough diamonds by travelling to Belgium, Africa and Israel. Now, about three thousand small and medium merchants have this privilege through the new Special Notified Zone. Many of the most reputed international names in the diamond industry have conducted over two hundred and forty four days of viewings. My intention is to make India, which is already the cutting and polishing hub, into an International Diamond Trading Hub.

Ladies and Gentlemen, our goal is to transform India in one generation. Since taking office, this government has placed emphasis on many transformative initiatives. ‘Make in India’ is one of them. Our aim is to make India a preferred destination for manufacturing. In the last fifty years, the gems and jewellery sector has accounted for four hundred and seventy five billion dollars of exports. This is despite the fact that India has little diamond or gold production. Another important initiative is Skill India. Skill India aims to ensure that new entrants to the work force have the necessary skills to contribute to the economy of the 21st century. The gems and jewellery sector employs 4.6 million people. Out of this, one million people are in the diamonds industry alone. Thus the gems and jewellery sector is a prime example of the potential of ‘Make In India’ and Skill India.
Today, we have with us Ministers from several African countries. India cherishes its excellent relations with Africa. Our shared post-colonial heritage and the similarity of the challenges we face, make us natural partners. I take this opportunity to assure my friends from Africa that India will be happy to support them in developing their gems and jewellery sector, and in training their technicians.

I began by saying that this sector has come a long way from where it was. However it is still far behind where it should be. Our strongest area is diamond cutting and polishing. In terms of the global value in the gems and jewellery market, our share is lower than it should be. Our future is much bigger than cutting and polishing alone. We have a lot of unexplored potential. Let me ask you a question:

What is your strategy for increasing India’s share of the hand made jewellery market?

I am told that to a significant extent, Indian exports are importer-led: the specifications and designs are based on preferences given by importers. This means that India is a follower of global fashion rather than a leader of global taste. This does not do justice to our rich experience and abundant design talent. Let me give an example. India has many famous icons, sculptures and statues dating back over two thousand years. Many of them are shown wearing jewellery. These works of art have captivated people from around the world. Have we documented these? Have we thought of promoting jewellery based on these works of art?

In order to be able to influence and change global fashion, our industry first needs to have a thorough knowledge of its market. The industry collectively needs to study and understand the end-users and what they want: for example, some areas and some groups may prefer gold, others silver and yet others platinum. The basic point is that we cannot be world leaders without first connecting strongly with the client. E-commerce makes it much easier to establish direct contact with the end-user. This is a golden opportunity for the Indian industry. The industry could think of encouraging start-ups by young entrepreneurs who can create a growing market for made-to-order Indian jewellery.

There was a time in the past where some products from India had achieved a global reputation. Today, India has acquired a global brand for high skills and excellence in software. We are yet to do that in jewellery. If we do that, the potential is huge. This is a task which the Council should take up in right earnest. But the states also have a role to play. Since taking office, we have encouraged state governments to take an active role in export promotion. I hope the industry is in constant touch with them. Apart from exports, India as the fastest growing economy in the world will also see increased domestic demand.

It is important for the industry to plan its growth. But that is not enough. It is also necessary for you to think of the weakest among you. The Council should consider taking a census of the lowest-paid and least prosperous persons in your industry, for example the workers living in places like Jaipur, Thrissur, Varanasi, Rajkot, Jaipur and Coimbatore. Can the industry ensure that every one of them is enrolled in the Government’s low cost social security schemes like

--the Atal Pension Yojana for an assured minimum pension?

Friends. India will celebrate the seventy fifth anniversary of its Independence in 2022. What goals is the gems and jewellery industry setting for itself by that date? What can you do for the country by then? Where do you think the industry should be by then? How will you get there? How many new jobs can you create? I call upon you to give this a serious thought and come up with a plan. If changes are needed in regulations, I ask you to come up, with specific and practical suggestions. We can certainly consider them if they are in the interest of our country.

I conclude by thanking you for this opportunity to share my thoughts. I wish the conference all success.