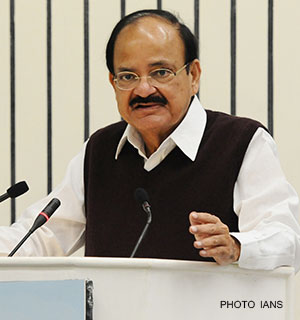 A Government appointed Panel has recommended necessary legal and policy framework to protect the interests of the migrants in the country, stating that the migrant populationmakes substantial contribution to economic growth and their Constitutional rights need to be secured.

The ‘Working Group on Migration’ set by the Ministry of Housing & Urban Poverty Alleviationin 2015 who submitted their Report to the Government today held extensive discussions with Minister of HUPA Shri M.Venkaiah Naidu.

The Working Group has recommended that the Protocols of the Registrar General of India needs to be amended to enable caste based enumeration of migrants so that they can avail the attendant benefits in the States to which migration takes place. It also recommended that migrants should be enabled to avail benefits of Public Distribution System (PDS) in the destination State by providing for inter-State operability of PDS.

Referring to Constitutional Right of Freedom of Movement and residence in any part of the territory of the country, the Group suggested that States should be encouraged to proactively eliminate the requirement of domicile status to prevent any discrimination in work and employment. States are also to be asked to include migrant children in the Annual Work Plans under Sarva Siksha Abhiyan (SSA) to uphold their Right to Education.

Noting that money remittances of migrants was of the order of Rs.50,000 cr during 2007-08, the Working Group suggested that the vast network of post offices need to be made effective use of by reducing the cost of transfer of money to avoid informal remittences. It also suggested that migrants should be enabled to open bank accounts by asking banks to adhere to RBI guidelines regarding Know Your Customer (KYC) norms and not insist on documents that were not required.

The Group suggested that the hugely underutilized Construction Workers Welfare Cess Fund should be used to promote rental housing, working Women Hostels etc., for the benefit of migrants.

Quoting data of Census 2011 and National Sample Survey Organisation (NSSO), the Group stated that migrants constitute about 30% of the country’s population and also of the total working force.

Shri Venkaiah Naidu asked Ministry officials to send report to all concerned ministries and convene a meeting on further course of action.