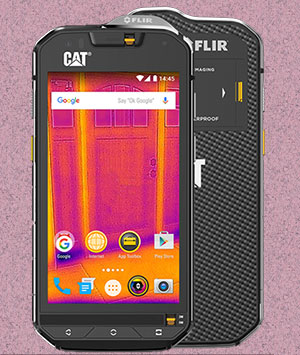 Cat Phones, which are known for the resilient functions in their handsets, have finally released their flagship smartphone S60 in India on Thursday. The device is embedded with thermal camera and as such, is first of its kind and there are some other extraordinary features to look out for. The phone is price at Rs. 64,999 and is available online from Amazon India, as well as, from premium, multi-brand retail stores from March 17 onwards.

Linda Summers, the Chief Marketing Officer (CMO) of the Bullitt Group stated that the company is looking to tap the potentialities of the evolving Indian market, which is characterised by fast growth and sophistication too. The CMO cited the bright economy of India behind the step of launching the product targeted towards B2B sector, as well as, consumers.

It is to be noted here that Bullitt Mobile Ltd., a part of the UK based Bullitt Group, has been licensed by Cat or Caterpillar Inc. to manufacture sturdy feature and smart phones, as well as, accessories for the latter company. Cat S60 was launched at MWC 2016 and thus it took almost a year for the phone to get to Indian subcontinent. Caterpillar, an American enterprise specialises engineering, manufacturing and selling of high quality machinery for mining and construction; engines for natural gas and diesel; gas turbines for industrial purposes; other related products and services.

The Superb Built: Coming to the specifications of the phone, the roughly octagonal-shaped device (with a bump of FLIR module at the top) has a dimension of 147.9x73.4x12.6mm and weighs 223g. The appearance of the phone is quite stylishly tough, the body being encased in a die cast frame. The Carbon fiber back and the stainless steel sides lend it a resilient yet polished look. The durability aspect of the phone is worth the hype and needs special mention. The excellent endurance of the gadget against extreme temperatures, shocks and drops has conferred it with a MIL-STD 810G rating, while the IP68 certification speaks of its water, dust resistance ability. The Caterpillar Inc. specifies that it can withstand a temperature range of -25 to 55 degree Celsius, a fall from about 6 feet (1.8m) and immersion in water for 1 hour up to 5 metres of depth.

The Distinctive Camera: The additional integrated rear thermal camera is the USP of the phone and as per claims is capable of sensing surface heat from proximity of about 30m, which is unbelievably good. The FLIR Lepton Sensor, which has the exclusive MSX technology, is integrated in the S60 handset. Although the sensor has a meek resolution of 640x480 VGA, still it instils much interest in users. The shooter uses infrared spectrum to capture light and detect temperatures of surrounding objects. When we click onto the FLIR app, the camera starts sluggishly and then presents images, videos and even timelapse footage in amazing blend of many colours.

We can measure the overall temperature of a particular scene, or can drag the markers to gauge the temperature of particular objects with the Thermal imaging feature. The temperature spot meters and heat palettes along with other settings in this default camera make things more interesting. Using this technology, one can check level of a gas cylinder, find gaps in insulation, get assisted in plumbing, etc. It also enables a penetrating vision through obscurities like smoke, darkness, etc. The readings are accurate to one decimal point.

There is a normal camera too, with a 13-megapixel rear (with Autofocus) and 5-megapixel rear shooter. The video shooting can be done with a resolution of 1080p at a speed of 30 FPS. The icing on the cake is the feature that allows photography and video shooting to be done beneath the water too. The main camera functions along with the thermal shooter to provide a different experience altogether. We can catch the visible-light form and thermal signature version of a same picture with a swipe.

The Efficient Display and the Controls: A relatively small 4.7 inch screen of the Cat S60 makes it a lot more ‘mobile’ than most of its contemporaries. Even though that display is only HD, it is super bright and clear and is protected by Corning Gorilla Glass 4. Using a-Si AHVA technology and a resolution of 720x1280 pixel (~312 ppi pixel density), the phone’s display does a decent job and ensures good visibility even in strong, direct daylight. Moreover, the touchscreen is compatible with gloves, as well as, wet fingers, which offers much liberty to the users.

The lockdown switches (at top and bottom) of the device are typical ones and allow toggling between 2m and 5m depth underwater options, guarding the front-facing speakers and microphone simultaneously. There is a covered, red SOS button which connects you with preset contacts by sending out location details and messages in emergent situations. A yellow programmable switch is provided to customise quick launch of preferred apps in the phone through settings menu. Alongside this and above the SOS switch, lies the power button. Opposite to these three controls, the volume rockers are set to the right side.

The Stellar Power and Flapped Ports: Packed with a non-removable 3800 mAh battery, the handset promises a talk time of up to 30 hours and standby time of up to 43 days in normal conditions. It is powered by an 8-core Qualcomm Snapdragon 617 MSM8952-3 Soc (4 x 1.5GHz + 4 x 1.2GHz), which is not so fast, but still works fine. It has a substantial storage capacity of 3GB RAM and 32 GB ROM, which can be expanded up to 32 GB via microSD card.

Cat S60 is a rare smartphone, not only for its military standards, but also since it bears a headphone jack in its side. To the bottom left side, along with the audio connector, lies the USB port, both covered by flaps. Not to forget the SIM card and microSD card trays which are positioned at the back besides the camera lenses. The carriers are sealed with again, a flap that looks more like a spring loaded mini door.

The Unambiguous Software: Running on Android 6.0.1 Marshmallow, the unlocked phone is free of any bloatware and has only got a few Cat and Flir specific apps to fill in. The unwanted pre-installed apps are something that would not be found in its interface and is also devoid of real customisations. The default screen has Google Now launcher, UI tuners and other useful menu for various functions.

The Suitable Connectivity: The dual-SIM handset has quite a modest line up of options, as far as connectivity is concerned. There are 4G LTE, Bluetooth v4.1, NFC, WiFi 802.11 b/g/n 2.4GHz, FM Radio, Micro USB 2.0 with OTG, 3.5 mm audio jack. It has GLONASS, GPS, aGPS, Beidou for smooth navigation and positioning. The device supports only FDD-LTE 1800MHz (band 3).

Further, the sound quality of the speaker of the S60 is also touted to be of high quality, as the company claims that it can output over 150dB of loudness. As regards sensor, the handset includes Accelerometer, Ambient Light Sensor, Proximity Sensor, Magnetometer and Gyroscope.

In totality, Cat S60 is a worth clinching phone for the people who work in rough environments or for consumers who prefer robustness over fancy features. True that the display, processing speed, and design are something that could have been more advanced. Also, the prices are at slightly higher side. But then one cannot overlook the great power backup, the lasting quality (both under water and on concrete) and the uncommon thermal camera functions that it offers unlike others.

Moreover, for people working as utility workers, engineering and related professionals, expert cooks, in disaster management teams, for sports and trekking enthusiasts, etc., this device is specifically and thoroughly useful. The model is available in a single shade of Black.