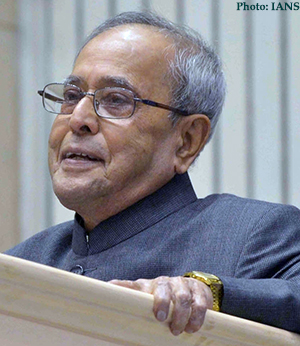 The President of India, Pranab Mukherjee will visit Kerala and Tamil Nadu from March 2 to 3, 2017.

On March 2, 2017, the President will inaugurate a Seminar on 'Importance of Sustainable Culture Building' being organized as part of the third edition of the Muziris Biennale in Kochi. On the same day, he will also deliver the Sixth KS Rajamony Memorial Lecture at Kochi. On March 3, 2017, the President will present Standard to 125 (H) Sqn and Colours to MTI of Indian Air Force at Tambaram, Tamil Nadu. On the same day, he will also inaugurate the Centenary Celebrations of Women’s Indian Association at Theosophical Society, Adyar, Chennai.

The Kochi Muziris Biennale is an international festival of contemporary art organized by the Kochi Muziris Foundation in association with the Department of Tourism, Government of Kerala. Its three editions, since 2012, have resulted in Kochi occupying a prominent position on the global art calendar.

The Biennale has till date exhibited over 300 artworks by over 250 artists from all over the world and hosted more than a million visitors. This edition showcases 97 artists from 31 countries such as UK, USA, France, Germany, Sri Lanka and Pakistan. It has received around four lakh visitors till date.

The Memorial Lecture in Kochi is being organized in memory of Late Shri K. S. Rajamony, prominent lawyer and former Member of the Kerala Public Men’s Inquiry Commission (with the rank of a High Court Judge) from 1992 to 1997. Initiated in 2002, the K.S. Rajamony Memorial Lectures have been delivered in the past by eminent persons like Justice V.R. Krishna Iyer, Justice K.T. Thomas, Justice K.P. Balasubramanian, Chief Justice of India K.G. Balakrishnan and Minister of Law and Justice Shri Salman Khurshid.