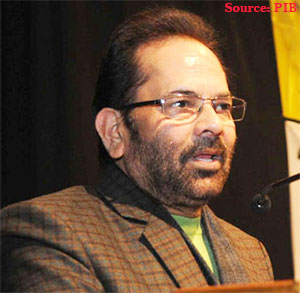 Rs 2600 crore provided for various scholarships and skill development schemes for Minorities in the Budget: Naqvi

The Minister of State for Minority Affairs (Independent Charge), Mukhtar Abbas Naqvi has said that the Union Budget (General) 2017-18 will be helpful in socio-economic-educational empowerment of Minorities. Naqvi said that the Budget of Minority Affairs Ministry has been increased to Rs 4195.48 crore for 2017-18. This is Rs 368.23 crore more than 2016-17 Budget of Rs 3827.25 crore with an increase of about 9.6 per cent. The Central Government’s focus is on educational and skill development of Minorities. Maximum part of the Budget 2017-18 would go for educational empowerment and skill development of the Minorities. It was stated by Naqvi while briefing the press here, today.

He said that for 2017-18, Centre has set a target to provide scholarships to about 35 lakh students. Employment oriented training will be provided to more than 2 lakh youths belonging to Minority communities. Besides this, Hon’ble Prime Minister’s new 15-Point Programme has been playing a key role in socio-economic-educational empowerment of Minorities. 24 schemes of 11 Ministries/Departments are presently covered under this programme. Various Ministries spend their about 15 per cent funds for development of Minorities. This has been increased by about 19 per cent.

Naqvi further informed that in the last year’s budget, about 2800 crore out of Rs 3827 crore have been spent on scholarship, training and other educational related activities. This also include scholarships worth Rs 1816 crore. About 90,000 Minority youths have been trained under “Seekho aur Kamao” scheme. About 70,000 women were provided leadership skills under “Nai Roushni”. Rs 650 crore were spent on educational infrastructure under Multi-sectoral Development Programme (MsDP).

During last six months, the Ministry of Minority Affairs also approved about 200 “Sadbhav Mandap” and 16 “Gurukul” type of schools with a cost of about Rs 262 crore. “Sadbhav Mandaps” will be used as community centres for various cultural-social-educational activities as well as relief centres during a calamity.

The Ministry of Minority Affairs has approved 16 “Gurukul” residential schools across the country including Telanagana (7), Andhra Pradesh (6), Karnataka (2) and Jharkhand 1. We have also decided to help those Madrasas who are also providing mainstream education.

Naqvi said that this “Hunar Haat”, with the theme of “Craft Aur Cuisine Ka Sangam” is unique in the sense that it would showcase crafts with the traditional cuisines brought from different parts of the country. “Hunar Haat” is being organized through National Minorities Development & Finance Corporation (NMDFC) under USTTAD (Upgrading the Skills & Training in Traditional Arts/Crafts for Development) scheme of Ministry of Minority Affairs.

More than 500 applications of artisans & culinary experts have been received covering 24 states. A total of 100 artisans and 30 culinary experts will participate at about 130 stalls in the second “Hunar Haat”, which will also have “Bawarchikhana” where various cuisine from different parts of the country will be showcased and the visitors can enjoy them. “Hunar Haat” is aimed at providing opportunity and a platform under one roof to artisans & craft persons of Minority communities, to demonstrate, showcase and sell their products. The selected artisans include several Awardees from 5 Minority communities representing as many as 23 states.

For the first time in this exhibition very exquisite pieces of Handicraft & Handloom work like Makrana Marble products, Bandhej from Sikar, Mojri from Rajasthan, Banjara Embroidery from Telangana, Handmade Locks & Door Handles along with Phool Patti works from Aligarh, Cocoon decorated products from Nagaland, Mizoram Traditional Crafts, etc would be showcased and sold.

Naqvi expressed confidence that just like the first “Hunar Haat”, which was organized in November, 2016 at Pragati Maidan, the upcoming “Hunar Haat” will also be successful.