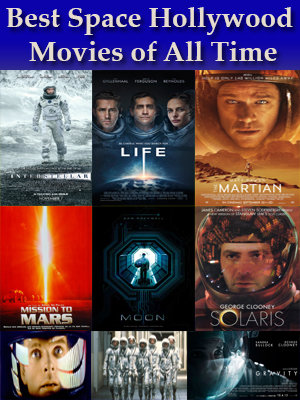 One of the most thrilling and interesting genres in film-making is Science -Fiction. A concept occasionally explored in that is space based movies. It is what gives the audience a glimpse into the unknown and the vastness and darkness of space. Space is infinite and not many people really know what can and cannot happen there. Below are names of some of the movies that give the audience an insight into what could possibly be in space or happen out there.

After the unprecedented success of playing maverick superhero Deadpool, Hollywood Hearthrob Ryan Reynolds pairs with Jake Gyllenhaal in one of this year's most awaited space thrillers "LIFE". From the writers of 'Deadpool'- Rhett Reese & Paul Wernick, Directed by Daniel Espinosa, Life has a stellar ensemble cast in the shape of Jake Gyllenhaal, Rebecca Ferguson, Ryan Reynolds, Hiroyuki Sanada, Ariyon Bakare and Olga Dihovichnaya.

Sony pictures entertainment India's LIFE tells the story of the six-member crew of the International Space Station that is on the cutting edge of one of the most important discoveries in human history: the first evidence of extraterrestrial life on Mars. As the crew begins to conduct research and their methods end up having unintended consequences, the life form proves more intelligent than anyone ever expected. The movie is all set to release in India on 24th March,2017.

Here is the list of other best space movies of all time:

You don't watch Gravity, you experience it. In one shattering calamity after the other, film rarely gives you space and time to breathe a sigh of relief, and even if does, you are grabbed by another even more precariously poised situation the next moment. It's tense and it's relentless, but even within all the chaos, the visuals and the images would never fail to induce gasps and a sense of wonderment. Alfonso Cuaron, with 'Gravity' changed the way we will look at space based films forever.

Not as clinical as 'Gravity' or as gloriously ambiguous as '2001: A Space Odyssey', Interstellar is at least as ambitious as both of them, if not more so. Replete with some of the best images you would have ever seen on-screen, 'Interstellar' is visually breathtaking and technologically awe-inspiring. At the same time, 'Interstellar' is also dense with ideas like blackholes, warmholes, theory of relativity, 5th dimension and warping of space and time, but ultimately it is an emotional story of father trying to re-unite with his daughter in the face of insurmountable odds.

The most recent film on this list follows a group a NASA scientists going on their expedition to Mars, when a fierce storm force them to leave behind a crew member, Mark, on his own stranded on a planet where there is no life. It is with the his wit that Mark keeps himself alive for more than a year, when his crew hatches an immaculate rescue plan and pulls it off daringly. The film was an immense success in the box office and received two Golden Globes. It also received 7 Academy Award nominations including Best Picture and Best Actor for Damon

'Alien' tells us of a group of explorers, who, in their expedition, receive a distress call from an unexplored planet. When they reach the planet, they start looking for survivors and realize that the call was indeed a warning and a deadly bioform has already joined them in their vessel, Nostromo. The success of the film sprawled a franchise of sequels, novels, books and games. 'Alien' has become a cult favorite among cinema lovers since and remains one of the best space sci-fi movies ever made.

'Moon' is a story of an astronaut, Sam Bell, who has a quintessentially personal encounter toward the end of his three-year stint on the Moon, where he, working alongside his computer, GERTY, sends back to Earth parcels of a resource that has helped diminish our planet's power problems. It is a movie that slowly and mysteriously builds to a great climax leaving you plenty to ponder upon. An unusually brilliant film.

A remake of Andrei Tarkovsky's 1972 classic and one of the few remakes that manages to retain the greatness of the original while approaching the story with a unique new perspective. Starring George Clooney, the film is the story of a troubled psychologist who is sent to investigate the crew of an isolated research station orbiting a bizarre planet. Mysterious, beautiful and affecting, 'Solaris' is about how cruel memories sometimes can be. Even though the film flopped when it released, it is well respected in sci-fi fan communities and among critics.

Ron Howard took a true story to which the entire world knows the outcome and turned it into one of the most intense and tension filled films ever made. Based on the ill-fated 13th Apollo mission bound for the moon, it is the story of astronauts Lovell, Haise and Swigert who are scheduled to fly Apollo 14, but are moved up to 13. It's 1970, and America have already achieved their lunar landing goal, so there's little interest in this "routine" flight.. until that is, things go very wrong, and prospects of a safe return fade. Easily, the best film Ron Howard has ever made.

Here's a film that did everything right (no pun intended), but still failed at the box office. Its commercial failure notwithstanding, 'The Right Stuff' is still one of the greatest stories about space travel ever created for cinema. Based on the book by Tom Wolfe the film covers the breaking of the sound barrier by Chuck Yeager to the Mercury 7 astronauts, showing that no one had a clue how to run a space program or how to select people to be in it. Thrilling, funny, charming and electrifying all at once

Undoubtedly one of the most authoritarian piece of cinema ever made, Stanley Kubrick's '2001: A Space Odyssey' could aptly be described as the ultimate exploration of "the unknown". With themes ranging from existentialism to evolution, the film has acquired a cult status over the years. Inspired by a short story named 'The Sentinel' written by Arthur C. Clarke, who co-scripted the screenplay along with Kubrick; the movie chronicles the journey of a crew of scientists to Jupiter along with the sentient computer HAL 9000. The movie went on to become one of the biggest influences on future science fiction projects and is easily the best space movie ever made.