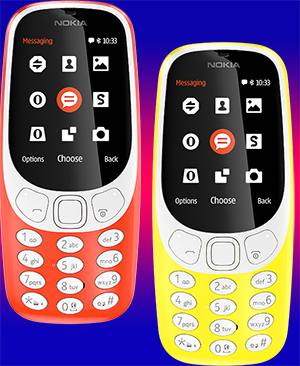 For the mobile lovers of yesterday, it was certainly a moment of great nostalgia mixed with the excitement of having the ultimate sturdiness back with Nokia 3310. The flashy variant of the set with the same name got re-launched with much fervour, commemorating the original powerhouse, which was launched in September 2000 and sold 126 million devices before being phased out in 2005.

The launch of the new edition of the much loved Nokia 3310 took place at Mobile World Congress (MWC) 2017 in Barcelona. Alongside the announcement, Nokia 3, Nokia 5 and Nokia 6 arrival was also officially declared. However, the 3310 happened to be the show-stealer amongst all.

Expressing his gladness, Brad Rodrigues, the interim President of Nokia Technologies commented, “We believe that their strong design and quality will appeal to Nokia fans around the world and the return of the Nokia 3310 has us smiling too!”

A Revisited Design: Coming to the functionalities that the device offers, Nokia 3310 reboot has much more to it than a regular feature phone. HMD Global, which owns the rights to the brand Nokia, rightly puts it as “reborn with a modern twist in design”. The look of the phone gives a passing impression of its old avatar with the curvy edges. There are T9 push buttons along with directional pad. The candy bar shaped phone, weighing 79.6 g, measures 115.6 x 51x 12.8mm, which means it is sleeker, lighter and smaller than its older sibling.

The Flamboyant Encasing: What is most catchy about this feature phones, is the neonic outer that they are available in. Although the tawdriness of the plastic body may be a turn-off for some non-lovers of the brand, it somehow defines the essence of its existence, being cheap. The options of hues in form of glossy Warm Red and Yellow, as well as, matte Dark Blue and Grey would serve for the vibrant taste and those on a bit sober side.

Camera and Display Upgraded: Deviating from the monochrome of the original version, the device has a 2.4-inch Quarter Video Graphics Array (QVGA) display with a resolution of 240x320 pixels. The user interface (UI) promises to be a refreshment, though with a hint of the older model. The screen has polarised layer and rounded window for better visibility in sunlight.

The 2.0 MP average camera is something that cannot be compared to the cameras of today. However, it is an addition big enough for an iconic handset that was purely basic. There is an LED flash to partner the camera, which has a resolution of 1600x1200 pixels.

Robust Battery Life: This is perhaps the most anticipated feature of the handset, and the makers do not disappoint the brand aficionados. A 1200mAh removable Li-Ion battery packed inside boasts of 22 hours of talk time and 31 days of standby time. Moreover, it is capable of providing MP3 and FM radio playback time of up to 51 hours and 39 hours respectively. The impeccable power backup of the phone is perhaps its best part.

Snake All Hooded Up: To play with nostalgia, the classic game of snake has been optimised to suit the chromatic rendition of the old Nokia 3310. There are also some updates in the game levels. An announcement of introduction of the cult game in a new version of Facebook Messenger App was made by the company.

Fair Connectivity Options: The phone runs on Series 30+ operating system while the processor and the RAM remain unspecified. In terms of on-board storage, the device has the capability of 16 MB, which is expandable up to 32 GB. There are both single and dual mini SIM slot options for the users. There is 3.5 mm jack which is listed as the AV connector at and micro USB v2.0 in replacing the pin charger. It does not allow the loading of apps and comes pre-loaded with Opera browser but limited by GSM 900/1800 MHz bands support. The phone is not compatible with Wi-Fi but features Bluetooth 3.0 with SLAM.

Other specifications include flashlight and speaker grill at the back near the camera lens. Although the reincarnation of popular durable handset would not cater to the smartphone users, it can serve as a retro collection or as a spare handset.

With a twang of new features to fit humbly into the new demands of the phone-users, the model is expected to set new standards in the market and revive the old affinity towards the brand. The phone will be available for sale in second quarter of 2017, in the markets of India, Asia Pacific, Africa, Europe and Middle East and will be priced at EUR 49, which comes to around INR 3470.