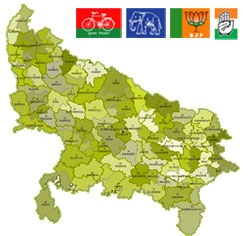 The voting for the Uttar Pradesh (UP) Assembly elections commenced at 7 am on the Monday morning and by evening 57.36% turnout of polling candidates was recorded. Fighting for the 51 seats, spread across 11 districts, 607 candidates have put their political ambitions on stake in this phase of polling and 40 among the candidates are females. Total registered electorates were reported to be 1,81,71,826,  of which 97, 91, 140 were males and 83,79,745 were women.

The voting process guarded by tight security, went out to be quite peaceful, as no major violent acts were reported. However, there were complaints of technical glitches in the Electronic Voting Machines (EVMs) at various places. Meanwhile, seizure of 2.20 litres of liquor bottles, and 4.21 crore of cash was done, as per the Election Commissions of India (ECI). Five of the districts fall in the sensitive Terai region near Nepalese border, where central forces held a flag march ahead of the elections, to assure safety to the voters.

The constituencies for which polls were held cover Amethi, Faizabad, Gonda, Ambedkar Nagar (earlier Mau), Shravasti Basti, Bahraich, Siddharth Nagar, Balrampur, Sultanpur and Sant Kabir Nagar. The death of Chandrashekhar Kanaujia, who was nominated from Samajwadi Party (SP), has lead to the deferment of the elections in Alapur to 9th March.

T. Venkatesh, the Chief Electoral officer of UP said, “57.36 per cent polling was recorded till 5pm and the figure is likely to go up as several voters waited in queues to exercise their franchise”. Slow pace was noticed during the initial two hours of the beginning of elections, which later accelerated, as the enthusiastic queue of voters moved to the polling booths. It is to be mentioned here that during the first four phases of the state elections 2017, the figures of voting stood at 64, 65, 61.16 and 61respectively.

Interestingly, 117 out of the 608 contesting candidates, in this phase, have criminal cases background as per the self-declarations. BSP has come out with 23 of such candidates, which is highest. BJP is the close second with 21 and SP has 17. The results came out in a study carried out by Association for Democratic Reforms and Uttar Pradesh Election Watch. In this study conducted, the affidavits of 612 candidates belonging to 75 political parties were analysed. The parties consisted of 220 independent candidates, 4 of state, 6 of national stature, while 65 stood as unrecognised.
Gayatri Prasad Prajapati (from SP), is among such controversial figures, who has a face-off with Garima Singh (BJP) and Amita Singh (Congress) in Amethi. The minister is charged with amassing huge wealth and rape offences.

The UP elections has been much sensationalised this time due to the Mulayam-clan split, followed by Akhilesh-Rahul ally and the verbal duels in the rallies, especially of BJP and Congress-SP.  The rallies for the fifth phase elections saw some very amusing references like  ‘donkeys in Gujarat’, ‘getting rid of Kasab’ (linked to the combination of Congress, SP and BSP)‘Kattapa of Bahubali’ and what not. While ‘Modi wave’ is expected to be a strong obstruction for SP and Congress, BSP may prove to be a determining factor, if not a winner, in this election.