Swara Bhaskar and Sandiip Kapur launch the trailer of Anaarkali of Aarah! 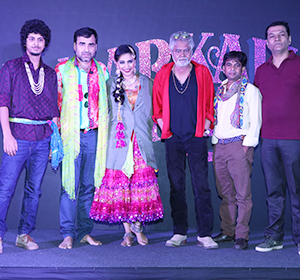 Swara Bhaskar has been the talk of the town since the release of the first poster of her forthcoming film, Anaarkali of Aarah, produced by Priya and Sandiip Kapur, starring her along with Sanjay Mishra, Pankaj Tripathi and Ishtiaq Khan among others, directed by Avinash Das under the banner Promodome Motion Pictures.

The scintillating poster featuring Swara sporting a multi-colour lehenga created a huge buzz among the viewers who couldn’t stop praising her bold avatar!

The trailer launch of the colourful entertainer was conducted amidst a packed house by producer Priya and Sandiip Kapur, director Avinash Das and the cast Swara Bhaskar (dressed as Anaarkali), Sanjai Mishra, Pankaj Tripathy and Ishhtiaq Khan.

Swara says, “Anaarkali is probably the toughest yet a very interesting character I've portrayed so far. Toughest because I wasn't familiar with such a different world which exist in our society. Watching several YouTube videos of singers like Anaarkali really inspired me as an actor. We also did workshops on our diction, accent and speech. It was a fabulous experience.”

Producer Sandiip Kapur says: This subject has been very close to my heart since the first story narration. I am extremely proud of the final product and the performances of everyone, from Swara to Sanjay and Pankaj to Ishhtiaq are worthy of great applause. I thank my entire team for making this story a reality that you shall soon see.

Produced by Priya and Sandiip Kapur and written and directed by Avinash Das under the banner Promodome Motion Pictures, Anaarkali of Aarah featuring Swara Bhaskar, Sanjai Mishra, Pankaj Tripathy and Ishhtiaq Khan is scheduled to release on March 24.