'Science Express Should Reach Out to more than Six Lakh Villages of The Country': Anil Madhav Dave 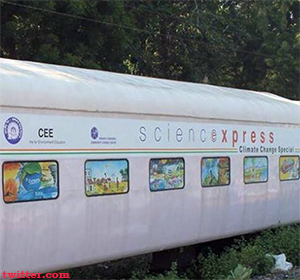 ‘Climate Change a Big Threat to Mankind, Can be Tackled Through Collaborative Efforts' : Suresh Prabhu

‘Four More Trains Must be Run in The Coming Years to Make it an Even Bigger Movement': Harsh Vardhan

Addressing the gathering, Shri Dave said that in future, the Science Express should reach out to 6.5 lakh villages of the country. He emphasised that till the train is transformed into a peoples’ movement and a vehicle to motivate people to take individual actions and initiatives to fight climate change, it will not succeed in its endeavours on the ground and will only be reduced to becoming a point of discussions in seminars. “What should each individual do, what should the governments do, what should the society do, everyone’s role has to be determined”, Shri Dave pointed out. The Minister highlighted that transparency in work and every pie of taxpayer’s money must be utilized in the right measure and past efforts have to be continued to ensure that the money reaches the people.

Minister of Railways Shri Suresh Prabhakar Prabhu said that Climate Change is a big threat for the mankind and we can tackle this through collaborative efforts. Under the leadership of the Prime Minister, Shri Narendra Modi, India played a key role in initiating Climate Action Plan during Paris meet. He also said that Science Express will not just convey the message about climate change, but also generate dialogue and discussion on this burning issue. Science Express will embark on its journey of over 19000 km to cover 68 locations across India till September 8, 2017 and is expected to attract 30 lakh visitors. Climate Action Special will spread awareness on this key issue and augment our efforts to ensure a better future.

Speaking on the occasion, Dr Harsh Vardhan said that four more such trains must be run in the coming years to develop the train into an even bigger movement. The Minister also said that the importance of Climate Change can be gauged from the fact that it is the only theme that has been chosen for two consecutive years for Science Express. Recalling his visit to San Fransisco to represent India at two meetings on Mission Innovation and Clean Energy Ministerial last year, the Minister said that 21 big nations of the world acknowledged that led by the Prime Minister, Shri Narendra Modi, India has taken unparalleled initiatives in the field of Clean Energy, Mission Innovation, or Climate Change and that India has the ability and the strength to lead the world. He added that the role of school students is most critical in making the Science Express a peoples’ movement. Recounting the statistics, the Minister said over 1.5 crore visitors and students from 33, 801 schools have visited the Science Express till now. The Minister also lauded the role and contribution of all departments and agencies at the Centre and States, as also the educators aboard the train in the running of Science Express.

After today’s flagging off, the SECAS will be open for public viewing at Delhi Cantonment Railway Station on February 18-19, following which it will embark upon its journey across the country. SECAS II will run from February 17 to September 8, 2017 (See Schedule), over 19, 000 km during which it will be exhibited at 68 stations across India. The exhibition will convey a message about Climate Change and will also be a good opportunity to generate dialogue and discussion.

At each halt of SECAS, activities are planned to engage visitors across different age groups to reinforce its message. An exciting and much sought-after Outreach Programme is also conducted in local schools/institutions, along with activities on the railway platforms. In addition, informative take-away material has been made available for wider distribution amongst schools and visitors.

DST has entrusted Vikram A Sarabhai Community Science Centre (VASCSC), Ahmedabad with the task of managing the SECAS across India. VASCSC’s team of qualified, trained and highly motivated Science Communicators travelling with the train explain and interpret the exhibition, answers queries, facilitate the visitors and conduct complementary activities.

The exhibition is open to all, but primarily targets students and teachers. More information is available on the website www.sciencexpress.in. For visit to the exhibition, an email can be sent to sciencexpress@gmail.com, or the team aboard the train can be contacted on 09428405407. School students can participate in the JOS Lab in small batches of up to 20 students, by prior registration.