Director Dinesh Vijan wraps up the shoot of Raabta in Amritsar at the Golden Temple! 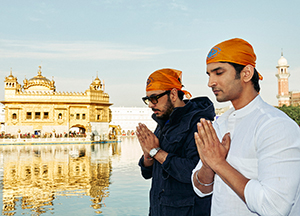 One of the most anticipated romantic films of 2017, Raabta staring Sushant Singh Rajput and Kriti Sanon recently wrapped up their shoot in Amritsar at the Golden Temple.

Director Dinesh Vijan, who is a strong believer in Golden Temple wrapped the shoot of his film with the end shot at Golden Temple which was a high energy song - 'Sadda Move', choreographed by Ahmed Khan and composed by Pritam. Interestingly, the first shot of the film was also at Golden Temple.

The cast and crew had a great time shooting on the streets of Amritsar.

Raabta is produced by Dinesh Vijan and Bhushan Kumar and presented by T-series and Maddock films. The film is all set to release on 9th June 2017.