PM's interaction with global CEOs of the Food Processing sector 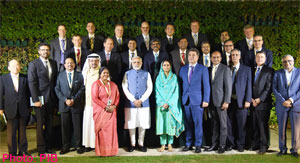 The Prime Minister, Narendra Modi, today interacted with CEOs representing the top companies engaged in the food processing and related sectors across the world. The interaction was part of the ongoing World Food India event.

Various CEOs complimented the Prime Minister on the massive improvement in India's rank in the recent World Bank Doing Business Report. Many CEOs said that they were inspired by the Prime Minister's vision of doubling farm incomes, and the pace and progress of economic reforms over the last three years under his leadership. They especially appreciated the structural reforms and bold initiatives such as GST and the liberalization of the FDI regime.

The participants stressed that the food processing sector is vital for raising farm productivity, food and nutrition security, creating jobs, and adding value to agricultural produce. The CEOs presented an overview of their engagement and initiatives for inclusive growth in India's food processing, agriculture, logistics, and retail sectors. They showed keen interest in opportunities that exist, for strengthening the post-harvest infrastructure. They reaffirmed their commitment to be a part of India's growth story.

Thanking the CEOs for sharing their views, the Prime Minister said that their observations indicate tremendous enthusiasm, about India. The Prime Minister appreciated the focused suggestions made by the CEOs.

The Prime Minister welcomed the measures being taken by the participants in raising agricultural productivity and farmers' incomes. In particular, he said that India's rising middle class, and the policy-driven initiatives of the Government, are opening up several win-win opportunities for all stakeholders in the food processing ecosystem. The Prime Minister underlined the Union Government's resolve to reduce input costs for the farmer, and eliminate losses due to wastage of farm produce. He invited the global CEOs for a deeper and more productive engagement with India.