Prime Minister of Latvia calls on the President of India 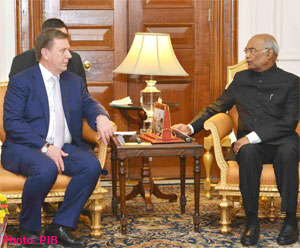 His Excellency Mr Maris Kucinskis, the Prime Minister of the Republic of Latvia, called on the President of India, Ram Nath Kovind, at Rashtrapati Bhavan (November 3, 2017).

The President said that bilateral relations between India and Latvia are warm and friendly. We should work together to enhance our economic relations. We deeply appreciate Latvia’s participation in the World Food India 2017 event. Latvia has acquired strengths in the agro-food processing sector and the participation of Latvian companies at World Food India will benefit both sides. The President stated that the Government of India has introduced programmes like Make in India, Smart Cities, Digital India and Clean India which present opportunities for Latvian companies. Latvia can also gain from the strengths of Indian industry, particularly in the IT and pharma sectors.

The President said that we deeply value our strong cultural ties and people-to-people connect with Latvia. He expressed happiness that the ‘Centre for India Studies and Culture’ established in the University of Latvia is promoting yoga and Hindi. He was glad that a new Centre for Baltic Culture and Studies has been opened at the Dev Sanskriti Vishwavidyalaya in Haridwar. He stated that this will further deepen cultural and academic contacts between India and the Baltic region.

The President noted that the Latvian Prime Minister will be inaugurating the Honorary Consulate of Latvia and attending business meetings in Mumbai tomorrow. He expressed confidence that these will help in further strengthening our bilateral ties.