When we pay attention towards environment, there won't be any tension about future of mankind: Vice President 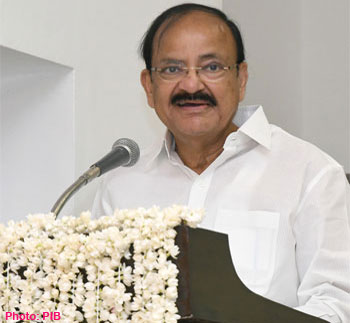 The Vice President of India, M. Venkaiah Naidu has said that when we pay attention towards environment, there won't be any tension about the future of mankind. He was addressing the gathering after inaugurating the International Conference on Environment - 2017, organized by the National Green Tribunal, here yesterday. The Chief Justice of India, Justice Dipak Misra, the Minister of Science & Technology, Environment, Forest and Climate Change and Earth Sciences, Dr. Harsh Vardhan, the Chairperson of the National Green Tribunal, Swatanter Kumar, Justice of the National High Court of Brazil & Secretary General of the UN Environment International Advisory Council of Environmental Justice, Justice Antonio Herman Benjamin, the Attorney General for India, K.K. Venugopal and other dignitaries were present on the occasion.

The Vice President said that the GDP is important but it is even more important to improve human lives. He further said that quality of life is the ultimate test of all our development efforts. Development has very little meaning if it doesn’t lead to health, happiness and harmony, he added.

The Vice President said that he has often confronted this question of what takes priority - environment protection or development. He further said that he can say confidently that there is no intrinsic contradiction between the two; all that is needed is to check over exploitation.

The Vice President said that each wing of our polity has a distinct role to play. He further said that the legislatures frame laws that address the concerns of the people, the executive effectively implements and delivers. The judiciary ensures that the laws are interpreted and implemented both in letter and spirit, he added.

The Vice President said that rapid economic growth and intensified industrialization has also led to increasingly unhealthy, polluting and carbon-intensive lifestyles. He further said that we have to adopt a better way of measuring growth, which is more holistic and reveals a truer picture of progress and quality of life and not merely economic growth. We have to invent and innovate methods to maintain economic growth and bring holistic prosperity without adverse impacts on the environment, he added.

"It gives me great pleasure to be a part of this august gathering. I must take this opportunity to appreciate the efforts of the National Green Tribunal (India’s foremost Environmental Justice Court), United Nations Environment Programme (UNEP), the Asian Development Bank, the Ministry of Environment Forests & Climate Change and the Ministry of Water Resources, River Development & Ganga Rejuvenation in successfully organising such events in the past at International and National levels and for the present event- World Conference on Environment, November 2017.

Brothers & sisters, we have had decades of deliberations on international environmental consciousness, jurisprudence and laws. We have progressed from denial to acceptance of global warming. We have moved from non-voluntary non mandatory contributions to voluntary commitments to mitigate the threat of climate change. Many countries have started taking proactive measures for protecting the environment.

We all are realizing a little slowly, a little painfully that we have been recklessly damaging our environment. Wisdom is slowly dawning upon all countries that our existence is at stake and we have to act fast to avoid a catastrophe.

At this point, I am reminded of the words of Mahatma Gandhi. He stated:

“The earth, the air, the land and the water are not an inheritance from our fore fathers but on loan from our children. So we have to handover to them at least as it was handed over to us”. These times call for collective intervention by the international community for pushing the environmental agenda and working on a meticulously charted sustainable development path of keeping global warming well below 2°C, while pursuing efforts to limit it to 1.5°C.

Economic Growth should not be seen as independent of environment. What nations needs to work together for, is sustainable economic growth.

Many countries around the world call our planet the Mother Earth. Many religions have given us a rich heritage of thoughts and ideas on living harmoniously with nature. In India too, we have a rich repertory of hymns and practices that celebrate, worship and preserve nature. For instance, Bhu-Suktam in Atharva Veda written almost 20 centuries ago, celebrates nature and seeks to see it protected and preserved.

“O Mother Earth, may your hills and snow clad mountains spread their coolness, may your forests spread delight. On your firm foundation which is unconquered, unslayed and unbroken, I stand firm.” Destruction of trees is frowned upon. As Prophet Mohammed said “He who cuts a lote-tree, Allah will send him to Hellfire”. In the Hindu tradition, all trees are sacred, all living and non-living creatures are valued and treasured. The seers have said “Ishavasyam Idam Sarvam” (The whole universe is divine and sacred).

These well-springs of our collective heritage need to be revived. We must not only recollect some of the best thoughts from our past but also shape our present in line with those noble ideals. Or else, our future might turn to be dark and bleak.

The signs of a catastrophic future are already actually here for us to experience. We do not have clean air and clean water in many cities. Our quality of life is constantly declining.

GDP is important but it is even more important to improve human lives. Quality of life is the ultimate test of all our development efforts. Development has very little meaning if it doesn’t lead to health, happiness and harmony. When we pay attention towards environment, there won't be any tension about the future of mankind

Having served in the Government of India for nearly four decades, I have often confronted this question of what takes priority- environment protection or development. I can say confidently that there is no intrinsic contradiction between the two; all that is needed is to check over exploitation. As Gandhiji had said, Nature provides enough to meet our needs but cannot provide for our greed. The challenge is huge. However, if we have the political will, the legal frame work and an able Judiciary, we can achieve results.

Each wing of our polity has a distinct role to play. The legislatures frame laws that address the concerns of the people, the executive effectively implements and delivers. The judiciary ensures that the laws are interpreted and implemented both in letter and spirit.

I do hope each of us in each of these spheres of responsibility, act in unison with a common objective but within the clearly defined parameters delineated by the Constitution.

The environmental change is occurring at a much faster rate than previously thought. These threats are population growth, rapid urbanization, rising levels of consumption, desertification, land degradation and climate change have combined to leave countries suffering from severe water scarcity. These highly disturbing trends are also making it increasingly hard for the world to feed itself.

To speak of Asia Pacific region, the rapid and much desired economic growth has left very huge impact on the natural resources and ecosystems. Worsening air quality, extreme water scarcity and humungous waste generation are threatening human and environmental health.

In Southeast Asia, the average area deforested annually is more than 1 million hectares, resulting in the release of hundreds of millions of tonnes of carbon dioxide every year between 2005 and 2015.

The contamination of water sources by human and industrial waste, including pharmaceutical and personal care products, is a major problem in the region.

It is estimated that about 30% of the population uses contaminated drinking water. Water-related diseases and unsafe water contribute to 1.8 million deaths annually in the region. Unsafe sanitation, disposal of untreated wastewater and runoff of agrochemicals are responsible for a rise in water-borne diseases, especially in Asia’s population-dense urban areas.

Uncontrolled dumping, which is still the main waste disposal method in the region, is also a major source of disease. In Mumbai, for example, about 12% of total municipal solid waste is burned either openly on the streets or in landfills.

Global Warming is not merely a concern due to increased temperatures. It is displacing people out of their homes, where their ancestors and forefathers have dwelled for centuries, in search of livelihood, food and shelter due to altered geographic and climatic conditions.

According to WHO, approximately 12.6 million deaths are attributable to unhealthy environments, i.e. nearly 1 in every 4 death recorded globally. Out of this 8.2 million deaths have resulted from non communicable diseases like cancers, strokes, heart problems, chronic respiratory diseases, etc. Regionally, the low and middle income countries in South-East Asia and Western Pacific Region are the worst hit.

Distinguished speakers and audience, I would like all of us to reflect on certain key issues and seek solutions to our current predicament.

1. Is it time for the World to formally adopt a better way of measuring growth, which is more holistic and reveals a truer picture of progress and quality of life and not merely economic growth?

2. Can we move beyond the boundaries of countries and adopt a regime of Global Civics and World Governance, in matters which are of great concern to the entire humanity?

3. Is it time to move towards an eco centric approach, where the role of human race is not merely that of stewardship, but that of Earth Trusteeship?

4. Can we discover, invent and innovate methods to maintain economic growth and bring holistic prosperity without adverse impacts on the environment?

We must find answers to these questions; and initiate swift action.

Let us not wait for the disaster to strike.

We have to combine knowledge and wisdom with concrete action.

We must define our roles and be watchful trustees of our natural wealth.

We must enhance awareness and proactively involve all sections of the population.

The agenda of the Conference is quite timely. I look forward to your fruitful deliberations and eagerly await your implementable recommendations.

I wish you all a successful conference!