India is committed to partner Bhutan in its socio-economic development: Venkaiah Naidu 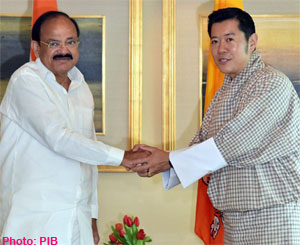 Calls on the King of Bhutan

The Vice President of India, M. Venkaiah Naidu has said that India is committed to partner Bhutan in its socio-economic development, and to support in its XII Five Year Plan. He was interacting with the King of Bhutan, His Majesty Jigme Khesar Namgyel Wangchuck, here yesterday. Senior officials from both India and Bhutan were present on the occasion.

The Vice President said that India and Bhutan share exemplary bilateral relations and these are unique and special. He further said that our historical and cultural linkages make us natural friends and partners. He thanked the King for his warm letter of felicitation on his assumption of responsibilities as the Vice President of India earlier this year.

The Vice President said that India is delighted to see the rapid progress which has been made in Bhutan while simultaneously preserving its very special culture as well as protecting the environment. He further said that the Government and people of India appreciate the vision of the Druk Gyalpos (Kings), which has guided relations between our two countries. With the wisdom and foresight of the Monarchs of Bhutan and Indian leadership, India-Bhutan relations have grown from strength to strength, he added.

The Vice President said that India has been happy to share its knowledge, experience and resources with Bhutan and thus contribute to Bhutan's socio-economic development. He further said that our development cooperation has been guided by the priorities set by the Government and people of Bhutan. India is committed to partner Bhutan in its socio-economic development, and to support in its XII Five Year Plan, he added.

The Vice President said that the security concerns of India and Bhutan are indivisible, intertwined and mutual. We look forward to continuing close cooperation with Bhutan on issues of mutual security concern, he added.