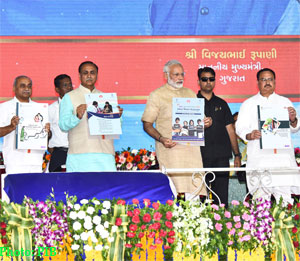 Addressing the public meeting, the Prime Minister said that the Antyodaya Express is a commendable initiative, which connects people and particularly helps those who are from Uttar Pradesh or Bihar, and work far from their home. He said the train will make it easier for people from Uttar Pradesh and Bihar to go home for Chhath Puja.

Shri Narendra Modi said that Gujarat's strides in animal husbandry have helped farmers. He said that he had asked the Chief Minister of Uttar Pradesh, Yogi Adityanath, to send a team to Gujarat and study the Pashu Arogya Melas. He added that a similar Mela had been organised recently in Varanasi, which the Prime Minister had an opportunity to visit.