Greatest Service We Can Render to Our Fellow Human Beings is to help them Achieve their Potential, Says President 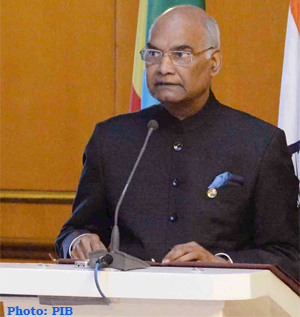 The President of India, Ram Nath Kovind, graced and addressed the initiation of various welfare progammes organised by the Mata Amritanandamayi Math (October 8, 2017) in Kollam, Kerala.

Speaking on the occasion, the President referred to Kerala’s role as one of the leading spiritual homes of our country and of our composite society. He stated that the bravery of our soldiers and the compassion and wisdom of our spiritual leaders are twin pillars on which we rest our hopes. These keep our civilisation secure. The flame of spiritualism shines brightly in Kerala and has done so for thousands of years. Revered people as Adi Shankaracharya, Sri Narayana Guru and Ayyankali did much to unite our country with a common sense of spiritualism – as well as to push for much-needed social reform.

The President said that Kerala’s spiritual consciousness is beyond faith and religious distinctions. The Christian community here is one of the oldest not only in India, but anywhere in the world. The first mosque to be built in India is in Kerala. Kerala also has a rich Jewish heritage. These historical instances reflect the mutual accommodation and understanding of different faiths and religious communities in Kerala. This is a state where one community has willingly given space to another. This is a history that we cannot forget and must learn from. And this is an accommodation and understanding that is at the essence of spiritualism.

Praising Mata Amritanandamayi for her social work, the President said that she represents the enlightened spiritual tradition of Kerala. Like Adi Shankara or Ayyankali she sees her spiritual mission as a contribution to nation building. She recognises, as only the truly spiritual can, that the greatest service to the Divine is service to fellow human beings. And the greatest service we can render to our fellow human beings – especially to those less privileged than us – is to help them achieve their potential. This includes building their capacity in health and education, and ensuring that they get equal opportunities. The Mata Amritanandamayi Math, the President noted, has worked precisely in these areas.