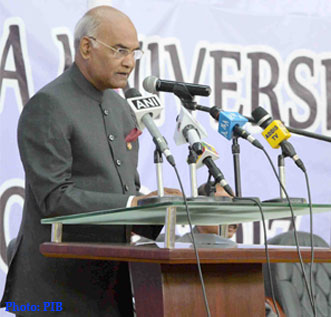 The President of India, Ram Nath Kovind, addressed the academic and student community at Addis Ababa University, the oldest university in Ethiopia, yesterday (October 6, 2017) before concluding his four-day State Visit to Djibouti and Ethiopia.

Speaking on the occasion, the President said that cooperation in education has been the fulcrum of Indian engagement with Ethiopia. When Ethiopia embarked on its efforts to expand its education sector, Indian teachers were invited here to teach in elementary and secondary schools. Those early pioneers travelled to the remotest parts of the country, instilled values and ideals in young minds and dedicated entire lifetimes to the noble calling of teaching.

Today, the President said, 2,000 Indian faculty members are contributing to teaching and to academic research in Ethiopian universities. Indian academics comprise the largest and among the most valued expatriate teaching communities in Ethiopian universities. We are proud that they serve as a bridge between our respective academic communities. They have fostered linkages and research collaborations between universities and educational institutions in both countries.

The President said that every year India welcomes hundreds of Ethiopian students as part of its African scholarship programmes. They come on fully-funded scholarships to carry out research or get a higher degree. This is a shining example of cooperation between two emerging economies. In addition, there is the Pan-African e-Network Project, a milestone in educational and capacity building collaboration between African countries, including of course Ethiopia, and India. It was created in this very city in 2009. Crafted in Addis Ababa eight years ago, it connects 48 countries of Africa to India.

The President said that just as Indian teachers have contributed to Ethiopian institutions, a steady stream of Ethiopian students has added to the scholarship and cultural mosaic of universities in India. It is a matter of great happiness for us that alumni of Indian educational institutions occupy positions of eminence in Ethiopia. He said that he understands this list includes the First Lady and at least nine Ministers in the Cabinet.

President pointed out that in terms of our demographic profiles, both Ethiopia and India are young countries; 65 per cent of India’s people are below the age of 35; and 64 per cent of Ethiopia’s people are below the age of 25. We have a similar set of challenges. These centre on equipping our young people and our students with the education and skills to compete in the 21st century economy. Above all there is the need to foster an economic model that contributes to local communities, rather than extracts from them. In this, Ethiopia and indeed all of Africa will find India a willing and sensitive partner.

The President said that outcomes of such a friendship are seldom a quick sprint; they are more likely to be a marathon. In India, Ethiopia has a long-distance running partner. And surely the land of Bikila and Gebrselassie knows and treasures the value of a long-distance runner.

Yesterday (October 5, 2017) in the evening, the President held wide-ranging talks with Ethiopia’s Prime Minister Hailemariam Desalegn. Subsequently, he attended the banquet hosted in his honour by the President of the Federal Democratic Republic of Ethiopia, Dr Mulatu Teshome in the Presidential Palace in Addis Ababa.