PM Modi addresses gathering at event to mark the inauguration of Umiya Dham Ashram at Haridwar, via video conferencing 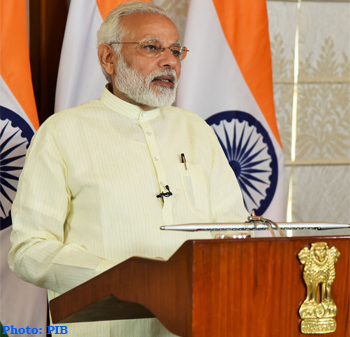 The Prime Minister, Shri Narendra Modi, yesterday addressed the gathering at the event to mark the inauguration of Umiya Dham Ashram at Haridwar, via video conferencing.

The Prime Minister said that spiritual institutions in India, have been centres for the spread of social reform. He described tourism as an ancient concept in India, and a spiritual tradition. He said the Ashram being inaugurated today would benefit the pilgrims coming to Haridwar.

He said the idea of a Yatra existed as an integral part of our culture. Through a Yatra, we get acquainted with various parts of the country that we may have never seen otherwise, he said.

The Prime Minister said that the work being done by devotees of Ma Umiya has touched the lives of several people. They have spread awareness on gender equality. He specially thanked the women of Mehsana district, who have furthered the message of "Beti Bachao, Beti Padhao."

The Prime Minister appealed to all devotees of Ma Umiya, to become Swachhagrahis, and add strength to the Swachh Bharat Mission.