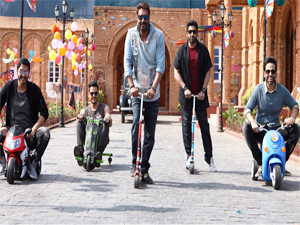 The Golmaal Again frenzy has spread over the internet ever since the release of its trailer last week. The trailer swiftly crossed one milestone after the other. The trailer garnered over 20 million views in less than 24 hours a record breaking feat in India's film history.

The makers of the film have partnered with PayTM, announcing a special news marking yet another milestone. Golmaal Again is the first film in history to open film ticket bookings a month prior to its release.

Releasing on Diwali- 20th October 2017, the latest instalment of the super-hit Golmaal series is certainly one of the most anticipated films of the year. Fans from across the nation are sharing the enthusiasm about booking their seats in advance for this laugh riot.

Talking about the association, Shibasish Sarkar COO, Reliance Entertainment said, “The response the trailer has been overwhelming and we look forward to continue reaching out to the fans of the franchise and giving them every reason to watch Golmaal Again this Diwali. Owing to all the anticipation, we are happy to have been able to associate with PayTM and make our film the first one to open ticket bookings four weeks ahead of its release.”

Talking about being the first Indian film to open the bookings a month in advance, Director Rohit Shetty said, “It is indeed a great feeling to witness the anticipation around the film and to see the movie-goers booking their seats month in advance to watch Golmaal Again."

Paytm has joined in as the official ticketing partner for the film. The company has launched booking in advance across India. Movie-goers can win vouchers worth Rs. 500 and get cash back of up to Rs. 100. Tickets are accessible in most theaters and multiplexes.