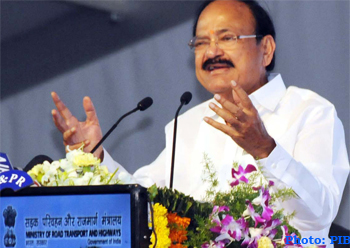 The Vice President of India, M. Venkaiah Naidu has said that linkage of rivers will help farmers of the country to grow more crops and increase their earnings which in turn will contribute towards the progress of the nation. He was speaking at an event to present 13th Dr. I.V. Subbarao Rythu Nestham Awards 2017, in Atkur, Andhra Pradesh today. The Agriculture Minister of Telangana, Pocharam Srinivas Reddy, the Agriculture Minister of Andhra Pradesh, Somireddy Chandra Mohan Reddy, the Health Minister of Andhra Pradesh, K. Srinivas and other dignitaries were present on the occasion.

The Vice President said that the governments have been considering inter-linking of rivers for decades, but because of certain hurdles the plan did not get materialised. He further said that by making small dams, Gujarat has shown how to preserve rainwater that reaches the farms. He suggested that the Center and the States should come out with a comprehensive policy on making agriculture a viable activity. States should work on farmer centric initiatives to increase farm income from agriculture, he added.

The Vice President said that there is a need for providing rural infrastructure facilities like road linkage, transportation etc., so that the farmers to get better market price for their products. Government’s recent initiative, National Agriculture Market (NAM) is a pan-India electronic trading portal which networks the existing APMC markets to create a unified national market for agricultural commodities. E-markets to facilitate farmers to buy and sell their produce, he added.

The Vice President said that as part of measures undertaken to boost the agricultural sector, the Centre gave top priority to this sector. He further said that, the Prime Minister, Narendra Modi has introduced rural road network and electrification schemes. Likewise the Centre also took path breaking initiatives to enhance expenditure in farm and rural sectors, he added.

The Vice President said that the rural electrification under Deen Dayal Upadhyaa Gram Jyoti Yojana, Pradhan Mantri Krishi Sanchi Yojana for water conservation and its management and insurance cover to farmers under Pradhan Mandtri Fasal Bima Yojana are some of the other initiatives of the centre for agriculture sector. He called upon the scientists to come out with innovative ideas to make agriculture a viable sector.