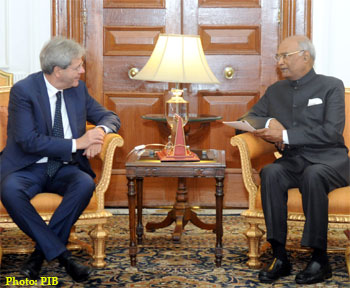 His Excellency Mr Paolo Gentiloni, the Prime Minister of the Republic of Italy, called on the President of India, Ram Nath Kovind, at Rashtrapati Bhavan (October 30, 2017).

Welcoming the Prime Minister of Italy to India, the President said that his visit is taking place 10 years after the visit of Prime Minister Prodi. And this visit holds very special significance for India-Italy engagement, as the two countries will be celebrating the 70th anniversary of diplomatic relations in 2018.

The President added that India and Italy are ancient civilisations and have interacted with each other for ages. He stated that the economic partnership between India and Italy is strong. However, there is potential to do more. India’s reform initiatives, including efforts at ease of doing business and GST, offer business opportunities to Italian companies. Infrastructure development in India itself is a US $ 1 trillion opportunity. India is keen to leverage Italian technology and investment for its growth and development. He was happy to note that Italian companies want to participate in the railways, auto, renewable energy and food processing sectors in India. He stated that Indian companies are also looking for opportunities in Italy.

The President said many commonalities bind India and Italy. Our relations are anchored in the shared values of democracy and rule of law. We have a large Indian diaspora in Italy. India deeply appreciates Italy’s recognition of their contribution to socio-economic progress. Our people-to-people connect is ever growing. There are over 2000 Indian students in Italy today. With so much that we share and jointly aspire for, our ties must continue to strengthen.

The President said we are very happy that Italy would be participating at the World Food India 2017 as a ‘Focus Country’. He stated that Italy is known to be the design capital of the world. He commended the personal initiative of Mr Gentiloni to celebrate the ‘Day of Italian Design in the World’. He added that this year the event, held in over 100 cities across the globe, was a big success. And we look forward to jointly celebrating the event in India next year.