We should all strive together to realise the dreams of Gandhiji: Venkaiah Naidu 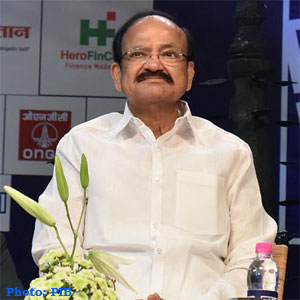 Unveils the Statue of Mahatma Gandhi

The Vice President of India, M. Venkaiah Naidu has said that we should all strive together to realise the dreams of Gandhiji and usher in ‘Ram Rajya’ where all are equal and there is no discrimination of any kind. He was interacting with the children from Dayanand Vidyalaya school after unveiling the Statue of Mahatma Gandhi on the occasion of the 148th Birth Anniversary, here today. The 1.8 meter long bronze statue is the first statue at Rajghat Complex. The Minister of State for Housing and Urban Affairs (Independent Charge), Shri Hardeep Singh Puri and other dignitaries were present on the occasion.

The Vice President inaugurated an Interpretation Centre in the Parking Area of the complex. This Centre enables interactive learning about the life and works of the Mahatma through Digital Display using LED screens. Visitors can watch films, life events, listen to speeches of Gandhiji besides participating in quiz, using ear phones for interaction without disturbance.