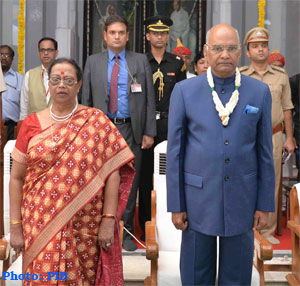 Speaking on the occasion, the President said that it was a privilege for him to visit the birth place of Mahatma Gandhi on this auspicious day. By achieving the goal of Rural ODF status, Gujarat has paid true homage to Gandhiji. He congratulated the Chief Minister of Gujarat and his entire team for the achievement.

The President said that cleanliness is not the responsibility of only sanitation personnel and government departments; it is a multi-stakeholder national movement. About 100 years ago, Gandhiji had tried to inculcate this by cleaning toilets himself. Achieving the goals of the Swachh Bharat Mission by October 2, 2019, will be an appropriate tribute to the Father of the Nation, Mahatma Gandhi, on his 150th birth anniversary. Today's achievement by Gujarat is a big step towards Clean India or Swachh Bharat.

The President also remembered Sardar Patel whose birthday too falls in this month, on October 31, and said that while Mahatma Gandhi was the leader of our independence movement, Sardar Patel was the sculptor of our national unity. It is impossible to imagine modern India without the contributions of Bapu and Sardar Patel. And both of these great men were Gujarat's gifts to India.