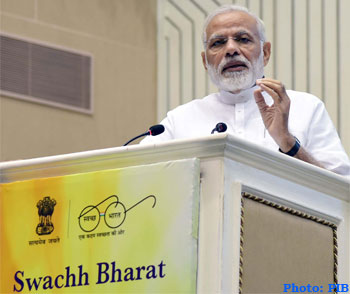 The Prime Minister, Narendra Modi, today addressed an event to mark Swachh Bharat Diwas: the 3rd anniversary of the launch of Swachh Bharat Mission, and the conclusion of “Swachhata hi Seva” fortnight.

He said 2nd October marks the birth anniversary of Mahatma Gandhi and Lal Bahadur Shastri; and is an occasion to reflect on how far we have travelled towards our goal of Swachh Bharat.

He recalled how the Swachh Bharat Movement had been initiated three years ago, amid immense criticism. He said he is convinced that the path that Mahatma Gandhi has shown, cannot be wrong. He said that even if there are challenges, that does not mean one must shy away from them.

The Prime Minister said that today people are expressing their desire for cleanliness in one voice. He asserted that Swachhata cannot be achieved through the efforts of leaders and governments, but can only be achieved through the efforts of the society. Jan Bhagidari has to be appreciated, the Prime Minister said, adding that today, Swachhata Abhiyan has become a social movement. He said that whatever has been achieved till date, is also the achievement of the Swachhagrahi people of India.

Mentioning the Swachhata rankings of cities, the Prime Minister said they have engendered a positive, competitive atmosphere. Swachhata needs a revolution of ideas as well; and competition gives a platform of ideas to the concept of Swachhata, he said.

The Prime Minister congratulated all those who contributed during the “Swachhata hi Seva” fortnight; but added that a lot more needs to be done.

The Prime Minister gave away awards to winners of national essay, painting and film competitions, and also visited a digital display gallery.