Kapil Sharma opens up at the Grand Trailer Launch of his movie Firangi! 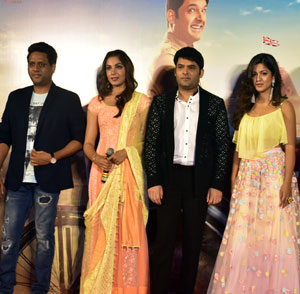 It was quite an afternoon filled with joviality to remember as Kapil Sharma along with director Rajeiv Dhingra and actors Ishita Dutta, Monica Gill and Kumud Mishra launched the trailer of Firangi.

The trailer of the film received a great applaud from the media and trade fraternity present. The trailer witnesses a never seen before avatar of Kapil who plays the role of 'Manga' in the movie.

Along with showing the trailer to the media, Kapil and the entire team even had a fun banter and interaction with the media present.

Slated to release on 24th November, Firangi is the story of Manga, a happy-go-lucky young man from the village Bahrampur, whose only aim is to join the police force.