Civic reception hosted in honour of the President in Thiruvananthapuram 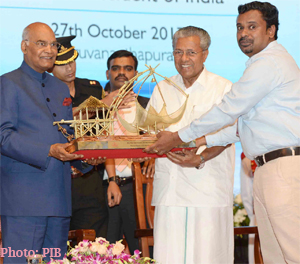 The President of India, Ram NathKovind, addressed a civic reception hosted for him at Tagore Theatre, Thiruvananthapuram (October 27, 2017).

Speaking on the occasion, the President said that historically Kerala is a land of spiritualism, with a tradition of spiritual leadership and social reform extending from AdiShankaracharya to Sri Narayana Guru to Ayyankali and so many others.

The President said that Kerala's traditions and thinking have been humanistic, people-oriented and democratic. The emphasis on human development and on health-care and education in Kerala has set an example for the rest of the country. In sanitation, Kerala's achievements are praiseworthy. In local self-government and panchayati raj, again Kerala has deepened our democracy.

The President said that not only are the people of Kerala educated and knowledgeable, they are willing to use that education and knowledge to venture out and to help build our nation and to contribute to the well-being and the prosperity of other regions.

The President said that today, Kerala continues to attract the international community. This beautiful state is one of India's leading tourism destinations. He stated that just as outsiders have flocked to Kerala, Kerala's people too have ventured out of their home state and contributed to the world. The Malayalee migrant community is the backbone of the work-force of so many Gulf States. And it faithfully sends back remittances to help in the development of Kerala and of India.

Earlier in the day, the President paid tributes to social reformer Ayyankali by garlanding his statue in Thiruvananthapuram. He also launched the Technocity project and laid the foundation stone for the first government building in Technocity in Thiruvananthapuram. Tomorrow, he will grace the valedictory function of the diamond jubilee celebrations of High Court of Kerala in Kochi before returning to Delhi.