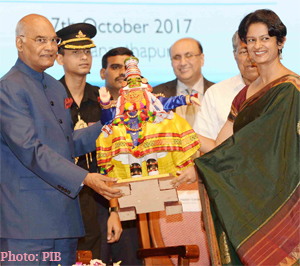 Address by the Hon'ble President of India Ram Nath Kovind at the Civic reception hosted in his honour, Thiruvananthapuram, October 27, 2017

1. I must thank all of you for this truly moving and emotional welcome. I am extremely touched. I feel like I have come to my own home. Thank you so much for this reception.

2. I am happy to be in Kerala for the second time in this month. And I am happier still to be here on the birth anniversary of Dr K.R. Narayanan, a distinguished son of Kerala and one of my honourable predecessors in the Presidential office. This morning, at Rashtrapati Bhavan, I paid my tributes before the portrait of President Narayanan, and then boarded the flight to his home state.

3. Historically Kerala is a land of spiritualism, with a tradition of spiritual leadership and social reform extending from AdiShankaracharya to Sri Narayana Guru to Ayyankali and so many others. Earlier today I was fortunate to pay floral tributes before the statue of Ayyankali and that memory will stay with me.

4. Over centuries, your state has been the home of some great religions. Hindu, Muslim, Christian and Jewish cultures are age-old and have existed in close proximity here. They have given space to each other. It is important to keep that tradition of harmony alive even today. It is vital that our cultural traditions continue to draw from the heritage of Kerala and of India.

5. Kerala's traditions and your very thinking have been humanistic, people-oriented and democratic. The emphasis on human development and on health-care and education here has set an example for the rest of the country. In sanitation, your achievements are praiseworthy. In local self-government and panchayati raj, again Kerala has deepened our democracy.

6. This focus on human development and on people's welfare is not new to Kerala. In fact, the kingdom of Travancore was one of our most progressive states before Independence. And the then princely family is remembered for its reforms and welfare measures. Of course it is also remembered for giving us that great artist Raja Ravi Varma.

7. God's Own Country has an uncommon and important identity as a global face of India. This is true in so many ways. Being a coastal state, Kerala has led Indian engagement with foreign countries and cultures. It has been at the frontier of trade.

8. Two thousand years ago, Roman ships used to come to the Malabar Coast. Later, merchant ships from Arabia and then from Europe were attracted to the ports of Kerala in their search for spices. They wrote of the efficiency and ethical practices of the ports. And praised the honesty of the administrators they met here in Kerala. In the 15th century, the Chinese explorer Zheng He was repeatedly drawn to Kerala and made several voyages to this state.

9. Today, Kerala continues to attract the international community. Your beautiful state is one of India's leading tourism destinations. The Ayurveda centres here are world renowned for helping people recover from crippling illnesses and rejuvenating them mentally. And as I learnt while launching the Technocity project today, Kerala also has a growing IT exports industry.

10. Just as outsiders have flocked to Kerala, Kerala's people too have ventured out of their home state and contributed to the world. A few weeks ago I travelled to Ethiopia on my first visit abroad as President of India. I met senior people in Ethiopia who turned emotional when they spoke of the impact of Indian school teachers on their lives 30 or 40 years ago. A large number of those pioneering school teachers were from Kerala.

11. This is not the only example. The Malayalee migrant community is the backbone of the work-force of so many Gulf States. And it faithfully sends back remittances to help in the development of Kerala and of India.

12. Nursing and health-care providers from Kerala are well-regarded for the excellence of their work across India and in many other countries. In Delhi and Mumbai and other cities, no hospital and practically no government or corporate office can function smoothly without the contribution of Malayalee staff members. As I pointed out earlier today, I too depended on colleagues from Kerala during my career as a lawyer.

13. There is much to commend in this professional approach and outgoing attitude. Not only are the people of Kerala educated and knowledgeable, they are – I should say you are – willing to use that education and knowledge to venture out and to help build our nation. And to contribute to the well-being and the prosperity of other regions.

14. This is not an easy thing to do. I can understand and appreciate the emotions of a person who has left his or her home in Kerala to go far away for work. The tug of home, the memories of one's village and family and friends – these are hard on the heart. I have had to migrate myself, and had to leave my village in Kanpur for the city and finally for Delhi in search of education and work.

15. The irony – happy irony I should say – is that part of my home in Kanpur is now occupied by a very nice and straight-forward person from Kerala, Mr George. He has been our tenant for the past 10 years, and he is the best tenant anybody can hope to have.

16. I cannot end without pointing to one of the other markers of Kerala's identity – your love for football. This is the home of so many of India's most devoted football fans.

17. India has successfully hosted the Under-17 Football World Cup. The final is to be played in Kolkata tomorrow. Some of the earlier matches were played here in Kerala. I hope you enjoyed the matches. I congratulate the state and the organizers for the smooth conduct of those matches. You have done the country proud. I also congratulate the spectators – some among you too may have gone to the matches.

18. That happy, sporting spirit is so typical and so lovable of Kerala. Please keep it up. It makes you and makes your state special. Best wishes to all of you and to Kerala. And once again, thank you for such a memorable reception.