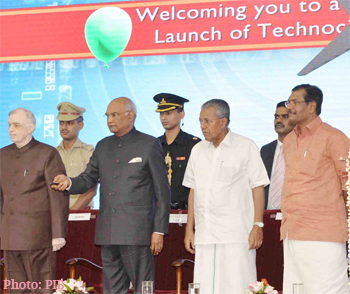 President of India Ram Nath Kovind At the launch of Technocity project and laying of foundation stone of the first government building in Technocity: Thiruvananthapuram, October 27, 2017

1. I am very very happy to be here to lay the foundation stone of the first government IT Building in Technocity –and to launch what will be the fourth phase of Technopark. This isone of the iconic Information Technology facilities in not only Kerala but our country. I must point out that such is the attraction of Kerala, it has drawn me for the second time in this month. And I have come on a special day. This morning at Rashtrapati Bhavan in New Delhi, I was privileged to pay my humble tributes to my predecessor and to a great son of Kerala, Dr K.R. Narayanan, on his birth anniversary.

2. Dr Narayanan's rise from a humble background to the highest office in our country was an inspiration for many of us. In his scholarship and learning, he combined some of the best legacies of Kerala and its people.

3. The wisdom of Kerala is also apparent in its spiritualism. As I pointed out on my previous visit, this state is one of the spiritual homes of our society. I had the good fortune of meeting Mata Amritanandamayi and inaugurating large-scale public welfare programmes of her Foundation. Truly, as Kerala has taught us, service to the divine lies in service to fellow human beings.

4. This sense of service has been deeply imbibed by the people of Kerala. I would say it has become your economic calling card. This is a state with an appreciable track record in public health and education, and is a front-runner in our country's quest to achieve total literacy. It is logical therefore that Kerala has also become known for its strengths in the services sector and the knowledge economy.

5. The future of our economy and of our employment creation is heavily dependent on the success we achieve with Digital India. The jobs of tomorrow will come more and more from digital services and other opportunities that are derived from the Internet.

6. Kerala is potentially a power-house of Digital India. It is one of India's most connected states, with among the highest rates of mobile phone penetration. I understand that the government is making efforts to bridge the digital divide and provide free Internet connections to two million poorer families by using a new optic fibre network. And there is ample evidence that our people, even those at the bottom of the pyramid, are very adaptive and can easily embrace and use new technology.

7. The Kerala IT sector has been growing. Among all Indian states, it is currently ranked eighth in terms of exports by IT and IT-enabled services companies. The IT sector provides direct employment to one hundred thousand (or one lakh) people in Kerala. This is only the tip of the iceberg. There is immense capacity to make these numbers grow.

8. Kerala's strengths in basic literacy and skills – and the experience of Kerala's people in the services sector and in consumer driven industries – make this state a natural for an IT ecosystem. I am confident that early development of Technocity will only accelerate this process.

9. In many parts of the country, people from Kerala are an essential part of the economic landscape. I must confess that my own career as a lawyer was helped in no small measure by the dedication and unstinted support of staff members and colleagues who happened to be from Kerala. I remain grateful to them.

10. And such achievements are by no means limited to India. Without the hard work of our brothers and sisters from Kerala, the economies of the United Arab Emirates and other Gulf countries would not be the same. Kerala migrant workers in those countries also contribute to the development of Indiaby unfailingly sending back foreign exchange. We cannot forget them or their immense role in nation building.

11. Kerala's fame as an educated and enlightened society goes far and wide. Recently, I travelled to Ethiopia on my first visit abroad as President of India. Wherever I went and whomsoever I spoke to in Ethiopia, there was always mention of the role of Indian school teachers. They arrived in Ethiopia 30-40 years ago and went to remote locations to teach little children. They shaped a society and its values – and became excellent ambassadors for India in Africa. Many of those teachers who are so remembered in Ethiopia, I was happy to learn, were from Kerala.

12. Climbing higher in the services sector value chain, Kerala has obvious advantages in three areas. The first is of course Information Technology. The others are tourism and health-care. These are also the areas where jobs and employment opportunities lie for our youth – especially for the talented young men and women of Kerala.

13. In tourism, this state is known the world over as God's Own Country – and not without reason. It is one of our planet's stand-out destinations. It is blessed with a spectacular natural beauty.

14. Yet, natural beauty is not enough to build a tourist destination. Hard work and planning have to go into it as well. Here the local people of Kerala – across the socio-economic spectrum – deserve to be congratulated for having created a remarkable hospitality industry and I would say hospitality culture. This is a role model for many parts of India.

15. In health-care, Kerala has long been known for its expertise in traditional healing systems such as Ayurveda. Kerala has also carved an identity for itself with the skills and diligence of its health-care providers.

16. Hospitals and medical centres across the country – and in many other countries as well – simply cannot function without the ever smiling and ever attentive “Sisters from Kerala”. In nursing, hospital and medical services and care for the sick and the aged, health-care workers from Kerala, both men and women, are internationally sought after.

17. As populations age and as health-care becomes more complex, demand for trained and capable human hands for the health-care industry will also only rise. This can provide numerous opportunities for young Indians. Kerala in particular has a head-start. We are seeing the advent of Artificial Intelligence and robotics in this area as well. But it is impossible for machines to match the empathy and emotions of a trained and dedicated nurse or care provider.

18. In conclusion, I must emphasise that IT is not just important in itself. It is a force multiplier for the entire services economy. It has played a game changing role in health-care, education, tourism and many other industries. Some of these areas, as we have seen, are Kerala's strengths. That gives me confidence that the development of Technocity will provide many, many new opportunities for the young people of Kerala. I wish all of you the very best.