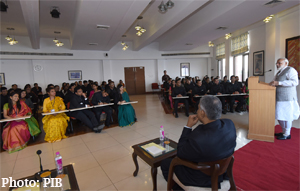 The Prime Minister, Narendra Modi, today met and interacted with over 360 Officer Trainees of the 92nd Foundation Course at the Lal Bahadur Shastri National Academy of Administration (LBSNAA) in Mussoorie, Uttarakhand. He is at LBSNAA on a two-day visit.

He had a lively informal interaction with the officer trainees in four groups. During the wide-ranging interaction, which lasted nearly four hours, the Prime Minister urged the Officer Trainees to express their ideas and thoughts to him frankly and without fear. A variety of subjects such as administration, governance, technology and policy-making came up for discussion. The Prime Minister encouraged the Officer Trainees to study and research governance issues in depth, so that they could understand them well. He also stressed on the need for them to develop a national vision. The discussions were marked by a large degree of experience-sharing.

He interacted with faculty members of the Academy, who gave him an overview of the work being done there, to train India's civil servants.

The Prime Minister visited the state-of-the-art Gandhi Smriti Library at LBSNAA. He attended a short cultural programme by the Officer Trainees.

Earlier, on arrival at the Academy, the Prime Minister offered floral tributes on the statues of Sardar Vallabhbhai Patel and former Prime Minister Lal Bahadur Shastri.