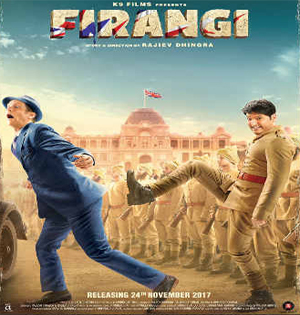 Mumbai:Ace comedian Kapil Sharma is back with a bang! The makers of Firangi released the trailer of the film and Kapil Sharma as Manga not only cracks you up but also impresses you with his innocence and hopefulness! Having received immense love and appreciation for his first film, the audience is now waiting with bated breath for Firangi.

The film is set during the British era and the audience will be witnessing the quirkiest fight against the Brits that has ever been showcased on the big screen!

Of course, Kapil floors the audience with his ‘kick-ass' response to every ailment.

Watching Kapil Sharma fall in love and fight for the truth will definitely warm your heart. With that said, we can't wait for November 24 to arrive already!

Founded in 2016 as a film production house, K9 Films (K9) is owned by the renowned actor and stand-up comedian of the industry Kapil Sharma. He is currently among the top celebrities of the industry. Under his banner, he has already produced the top rated shows 'Comedy nights with Kapil' & 'The Kapil Sharma Show'.

At K9, our aim is to capture audiences all over the world and serve them with an experience to cherish. Put your hands together as we are coming up with our first film ‘Firangi' releasing on 24th November, 2017.